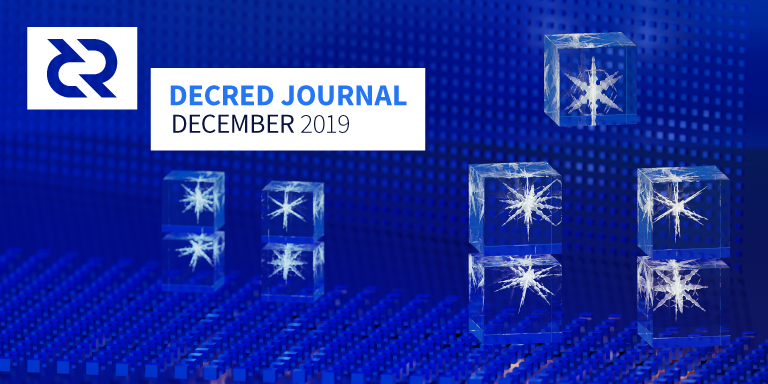 v1.5.0 release is out after about 5 weeks of testing and polishing. The new version brings many improvements covered in October issue. For full release notes and downloads visit the release page on GitHub. As always, verify the downloads before installing.

If you’re mining and haven’t upgraded, it is recommended to upgrade to avoid potentially having a block rejected due to being an old version.

Upgrade and vote progress is shown at voting.decred.org, more details and charts are available at dcrdata’s agendas page.

Finally, don’t forget to set voting preferences for the headercommitments agenda in your VSP accounts and solo voting configuration.

dcrd: Checkpoint logic simplified to pave the way to support checkpoints based on headers alone. Checkpoints are now also configurable by the caller. Orphan handling decoupled and moved from blockchain to block manager. In the bigger picture, these changes will help to decouple the connection code from the download logic, as required for multi-peer parallel downloading.

Support for bech32 addresses enhanced with convenience functions added and ensuring the human-readable part is lowercase to comply with BIP173.

Memory leak fixed that was especially relevant for setups that involve wallets with a very large number of addresses.

dcrwallet: createrawtransaction method implemented directly in dcrwallet so it may be called in SPV syncing mode or when the wallet is not syncing. It was previously only available in RPC syncing mode and required running a dcrd instance.

txsizes package was exported for reuse by dcrdex and dcrdata.

Decrediton: Numerous bugs squashed, including a bug in Trezor wallet that could be triggered if the Trezor wallet received funds from a non-dcrwallet sender that did not set the Sequence field properly.

Politeia: The main focus of Politeia development for December was fixing an issue where status change signature was not saved, and another where start vote signature was only a signature of the proposal token while it should be a signature of the entire Vote structure (which also includes vote params and options). The issues had no impact on users. The fixes are not backwards compatible so they required versioning the metadata. Since versioning of the start vote metadata was required anyway, the second fix also adds changes that will make supporting RFP proposals easier.

dcrlnd: Map of the Decred LN on mainnet is live. Note that while LN has been integrated into Decrediton, it should still be considered as in alpha form. If looking to use LN on mainnet, it is recommended to start on testnet, make sure you’re comfortable with operations you want to do on mainnet, and not use large amounts.

In other changes: order commitments added to spec, order timestamp resolution changed from seconds to milliseconds, completed switch to coin ID, which allows for supporting more assets in the future.

Remaining tasks for the DEX are:

dcrandroid: Major redesign of the user interface is finally merged after many months of work. This big change also included multi-wallet support (running more than one wallet concurrently). Remaining Java code and files have been converted to Kotlin. On the backend, multi-wallet support was added to dcrlibwallet, which uses a modified version of dcrwallet’s SPV module to sync all wallets in one process.

Other UI improvements include showing progress bar and estimated time remaining when rescanning and the QR code scanner gaining the ability to detect payment amounts.

Security enhancements: users can now unlock the app with their fingerprint, address validation was moved to security tools.

Work continues on multi-wallet support, and revamped UI for send and receive views.

Congratulations to the new contributor listed on decred.org:

Community stats as of Jan 3:

December was an unusually quiet month for Politeia, with no new proposals submitted. Two proposals from November were voted on in December:

Ditto has submitted their phase 3 communications proposal on Jan 7, discussion is ongoing.

Following analysis of the public orderbooks which raised questions about the level of liquidity provision, i2 Trading have provided full trading history logs that will allow for their performance to be scrutinized in detail. Company 0 are working on a set of tools for auditing i2’s performance in relation to the criteria specified in their proposal.

Politeia Digest has been taking a break while the level of Politeia activity is low, it will return when new proposals are submitted.

After staying between 400-450 Ph/s in November, in December the hashrate declined further and briefly went below 300 Ph/s (last time it visited this level during a short dip in Apr 2019).

Once again the ticket price made a new high of 158.76 since the sdiff algorithm change, while 51.9% is the new all-time high of stake participation.

On Dec 12, 16.1% of all DCR in circulation participated in CoinShuffle++ mixing.

dcr.pos.fans VSP removed from the listing since it has proven to be unreliable.

Warning: the authors of Decred Journal have no idea about the trustworthiness of any of the services above. Please do your own research before trusting your personal information or assets to any entity.

Outreach in December featured v1.5.0, with @davecgh educating about consensus changes on both Decred Assembly and Decred in Depth. The additional episodes of Decred in Depth and Decred Assembly featured @matheusd on Lightning Network. The copy for the website update was put into GitHub and submitted to the #web_ops team for assembly. The new site is expected to publish in January.

Much of the rest of the month focused on reflection, discussion, and planning for 2020. @bee’s post on marketing strategies prompted a vigorous discussion in #proposals, as Ditto and @Dustorf look to prepare their next proposals. @Dustorf followed up with a survey soliciting community input on priorities regarding geographies, market segments, and possible applications. He will also publish a summary of marketing expenditures prior to his next proposal.

Decred bullish sentiment hit a yearly high, according to LunarCRUSH.

A spec for the Stratum V2 mining protocol was published by Braiins in November, following the summer announcement. The new protocol addresses many issues in V1 and provides more efficient and secure communication between the hashing miners and the pool. A big feature of V2 is a new mode where miners choose transactions and version bits to include in the block, removing this power from the pool. This mode will be optional and will not be the default to avoid harming adoption. Joined by Matt Corallo and Peter Todd, Braiins hosted a comprehensive AMA on Reddit.

VTC suffered another 51% attack and a 600 block reorg, but this time it appears that the attackers probably failed to profit from the attack as Bittrex (the likely target) disabled trading as soon as it was detected.

The Wharton Cryptogovernance Workshop launched cryptogov.net, which includes “Governance Assessments”, self-assessed answers to a standard set of questions about blockchain governance, compiled by members of the different projects. Decred was one of 3 projects to have its answers uploaded ahead of the launch. @akinsawyerr attended an event at Wharton in Jul 2019 where the project was instigated, and also took the lead on preparing Decred’s answers, with some assistance from @richardred.

The results of the Zcash community sentiment polling were released. Participants were the community advisory panel and forum users, none of the PoW miners chose to signal using the polling method offered to them. Voters could signal support for all 13 proposals by voting Yes/No on each one.

There was very little support for proposals that did not continue to dedicate 20% of the block reward to development funding.

1% of all the circulating ZEC voted in the unofficial stake-weighted poll, the most popular options within this constituency were #10 and #8 (just 2 more years of 20% funding for ECC).

The Zcash Foundation decided to develop option #12 with some improvements, then rolled back on most of the improvements in response to pushback. The final slightly amended version of the proposal will be put to another community panel and forum user vote to confirm it.

ZIP 1012, as it has become, involves extending the block reward for 4 years at 20%, with 35% going to ECC, 25% to Zfnd, and 40% for additional “Major Grants”. Changes to the proposal involve making it more directly controlled by Zfnd, and removing a restriction that would have excluded ECC from receiving any funding as part of “major grants”. Another change added to the proposal by Zfnd is to “Call for, and incentivize, development of decentralized voting and governance”.

The Zcash Foundation also donated $40,000 to Open Privacy for development of Cwtch, a decentralized messaging and payments platform.

IOTA got itself in a tangle and was halted for 15 hours due to a bug with the Coordinator.

Jack Dorsey of Twitter announced that Twitter would fund research into a decentralized version of its platform.

Moocowmoo, a Dash Core advisor and provider of a custodial master node shares service, disappeared while in the process of winding down the service, leaving some clients waiting for their DASH back for an extended period. After the increase in attention, Moocowmoo re-surfaced and the DASH began to flow back to its rightful owners within a week.

Etherscan.io, a popular Ethereum block explorer, was blocked by the Chinese Great Firewall. No reasons were given, other block explorers remain accessible.

Google banned Metamask, a browser app for interacting with Dapps, from its Play Store, for allegedly doing covert mining. While their appeal was initially rejected, the ban was overturned a few days later.

Google also purged a lot of crypto-related videos on YouTube, before reinstating them after deciding it was an error. The incident apparently left many affected YouTube content producers looking at the decentralized alternatives available to them.

A Cryptocurrency Anti-Money Laundering Report from CipherTrace mentioned Decred as a cryptocurrency with privacy features.

The Stellar airdrop on Keybase has been ended prematurely due to a sharp increase in junk sign-ups, with 100,000 accounts being excluded and the final allocation of Lumens being divided between 282,000 users.

The /r/ethtrader donuts experiment continued with the launch of a special membership where members can pay a monthly subscription of 5,000 donuts to unlock features like name badges and the privilege to post gifs in comments.

The Maker Foundation sold 5.5% of the total MKR supply to Dragonfly Capital and Paradigm for $27.5 million in a bespoke arrangement that will see MKR put more emphasis on the Asian market.

Months after launching a custodial staking service for Tezos, the Coinbase exchange is now the #1 baker on the XTZ network.

“MetaCartel”, an effort to create a for-profit investment DAO in the mold of the original and infamous DAO but built on the complexity-averse Moloch, released a white paper. Moloch DAO announced an update to v2 which facilitates pairing Moloch with a legal entity without violating securities regulations.

There are around 81 Algorand relay nodes and these proposals were approved with yes votes from around 55 nodes (plus many abstentions and a few no votes). The Algorand nodes have completed KYC/AML checks and entered into a legal agreement with the foundation, such that part of the voting process for these proposals involved using DocuSign to sign and return copies of the amendment to the Foundation. KYC/AML checks are also mandatory for Algo holders who wish to participate in staking and receive rewards.

A new attack on SHA-1 hash function published early January has a practical application of impersonating PGP/GnuPG users and signing any document in their name. The attack cost is estimated $45,000 and will decrease as computation gets cheaper. If you use GnuPG, configure it to not use SHA-1 for signatures or upgrade to 2.2.18+. Signatures for Decred v1.5.0 release are not affected since they use SHA-256.

This is issue 21 of Decred Journal. Index of all issues, mirrors and translations is available here.

Most information from third parties is relayed directly from source after a minimal sanity check. The authors of Decred Journal have no ability to verify all claims. Please beware of scams and do your own research.