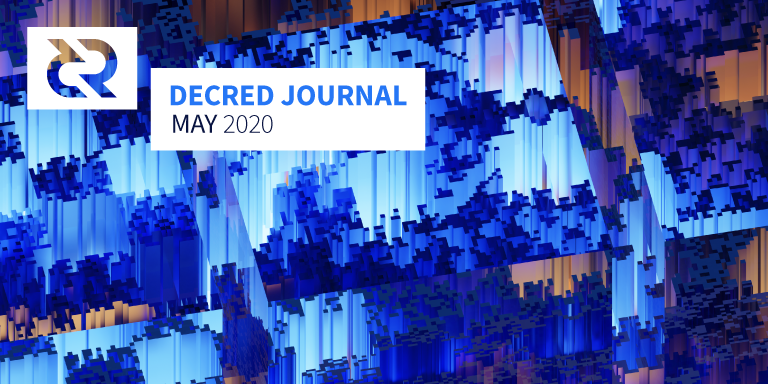 vspd is a from-scratch implementation of VSP software that will bring a huge improvement to the privacy of VSP users, and by extension, the security of the Decred network. It will also be much easier to use for having no registration, no emails, no CAPTCHAs, and no redeem scripts to back up. Check the announcement for more details.

MVP for vspd is nearing completion and dcrwallet integration is starting. The only outstanding feature for MVP is to get cross-wallet consistency checks to ensure all wallets are voting on the right tickets, and with the right voting choices.

@matheusd posted a demo of swapping between BTC and DCR invoices across their respective LNs. This is effectively an “instant exchange”, except it is using LN and is non-custodial. Note that this prototype has a known gaming vector and more R&D is required to resolve it (ideally based on PTLCs, but it is quite far away in the future). More details in this chat.

A total of 59 PRs from 10 contributors were merged, adding 10K and deleting 3K lines of code.

Testnet testing has begun and everybody is welcome to participate. There’s still a good chance that mainnet DEX will launch this summer.

Testnet build of the v1.5 release is available on Google Play. Bug reports are welcome on GitHub.

Testnet build of the v1.5 release is available on Apple TestFlight. Bug reports are welcome on GitHub.

Three Decred community members were included in the list of top 50 names in the Brazilian Crypto Market by Cointelegraph: Rafaela Romano in #35, Gabriel Rhama in #31 and the number one Edilson Osório Jr.

Community stats as of Jun 1:

There were 5 proposals submitted in May, and 4 of these started voting in early Jun. There was no Politeia proposal voting in May.

The new proposals are described in issue 31 of Politeia Digest and the vote outcomes will be covered in the next issue.

Lewis Harland published a piece of research about the Decred network that considers a number of metrics, including the ratio of hashrate to USD block reward which represents miners’ risk. It notes a decline of several metrics since Jan 2020 and suggests that DCR is trading at a loss relative to the total USD input to the network.

Transak brought a new way to purchase DCR with a debit card for residents of the US, EU, and many other countries, thanks to a partnership with Wyre. “Transak uses smart contracts to connect the end-user to liquidity on centralized and decentralized exchanges. Users will have to input simple KYC information, but the process from start to finish will take less than 5 minutes”. Now Transak is live in 32 countries, supporting 14 fiat currencies and 300+ cryptoassets.

Decred was present at the Consensus: Distributed virtual event where 6 community members delivered 4 sessions, all of which are on YouTube now. Besides this event that was based in USA, all other (known) events in May were targeting the Latam/Brazil region.

Decred in Depth and Rough Consensus podcasts published a total of 4 new episodes.

After starting his Medium blog in April, Phoenix Green expanded to YouTube video creation and as of writing his channel has 10 videos about Decred. Congrats on the launch and keep up the original quality content!

Monde PR’s achievements for May:

I gave my young son some Bitcoin at Christmas and was fearful he wouldn’t engage and he hadn’t mentioned it much since. Last week he came to me and asked “Should we not be stacking Decred Dad?” Ultimate Father/Son moment. (@veganreboot)

A wrap-up of phase 1 market maker activity by @richardred analyzed order book depth over time for DCR and other assets, concluding that it didn’t see an organic increase beyond the orders maintained by i2.

Bitcoin’s long-anticipated third halving of new issuance occurred on May 11, dominating the crypto news agenda for some period around this date and even penetrating more mainstream sources - much of it focusing on what effect it might have on the price.

One of several live events to mark the occasion, a seven-hour livestream organized by Cointelegraph, was unceremoniously halted mid-stream and deleted by YouTube for being “harmful content”.

The Dash Investment Foundation has responded to some friction (rejected proposals and private criticism from master nodes) by announcing that it will no longer seek decision-making autonomy and will reduce its ask from the Dash Treasury, coming up with a new VC strategy during Q2 2020.

Reddit introduced new blockchain-based tokens to be trialled on /r/cryptocurrency (Moons) and /r/FortNiteBR (Bricks). Tokens will be awarded to users of a subreddit in relation to their karma scores (50%), 10% for moderators, 20% for Reddit, and 20% for the “broader Reddit community”. In addition to serving as a badge of reputation on the subreddit points can be used to unlock features like posting gifs in comments. Points-weighted variants of polls have also been described.

Tech giants and dozens of governments have decided that smartphones are not backdoored enough and initiated an unprecedented mass surveillance program (attributed to COVID-19). Many technologies have “privacy-preserving” added somewhere in the title and it might be really secure this time. There is even a promise to terminate the tracking systems once the pandemic “ends”. Sarcasm aside, for cryptocurrency users it means a bunch of new privacy and security risks on their mobile devices and a strong incentive to consider alternative operating systems or even hardware.

This is issue 26 of Decred Journal. Index of all issues, mirrors, and translations is available here.