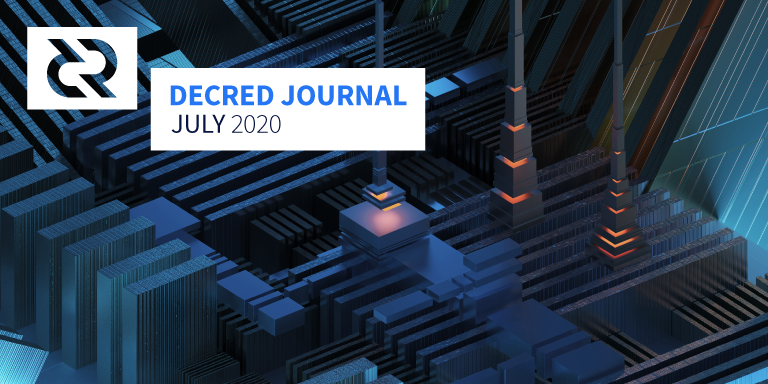 Commenting on the status of optimizations:

Flame graph for CPU usage shows pretty clearly that things are being dominated by IO now, so the biggest speedups left will definitely come from that front. ~10% GC, <1% validation, ~3.5% peer I/O, ~55% disk I/O, ~3% profiling cost, ~27% idle, and the rest in minor bits and bobs. (@davecgh)

A total of 53 pull requests from 8 contributors were merged, adding 11K and deleting 5K lines of code.

Decentralized Treasury spending pull request is undergoing testing and code review with over 350 comments now. A very notable change is that TSPEND transactions will use Schnorr signatures:

I suggested that we use Schnorr signatures for the Treasury payouts in order to pick up some of the benefits they provide such as smaller signatures and formally provable security. I recently cleaned up the Schnorr code to bring it up to the project’s high standards for consensus code and while there are some changes that we want to make to it in the future before switching to it for widespread usage with multi-party signatures among multiple untrusted sources, it is ready for prime time in the context of the Treasury payouts. (@davecgh)

If you have some idle hardware, you can help by fuzz testing dcrd.

A total of 35 pull requests from 6 contributors were merged, adding 9K and deleting 7K lines of code.

Multiple new features have been deployed to the proposals.decred.org site: RFP process, flat display of comments (helps to quickly spot new comments without hunting them down in the thread), dark mode, short proposal URLs, and a change to block the posting of comments once a day instead of once an hour (workaround for a limitation that will be fixed with the migration to the tlog backend).

vspd has now been deployed on testnet by a couple of existing VSP operators, deployment seems to have been straightforward for them and things are working as expected.

Community stats as of Aug 1:

You can see charts of all social media data points reported in Decred Journal and more here (raw data is in the same repository). Another good resource is community stats page of the dcrextdata project - it tracks fewer accounts but has much better data resolution and interactive charts.

There were 7 proposals submitted in July:

Two of these proposals have an issue with DCR-denominated budgets.

Check Politeia Digest issue 33 for more details about the first two of these, issue 34 with details of the other new proposals will be out soon.

Decentralized Boutique announced “Decred Grenade” that is also available as a digital download for printing at home, for people who would rather avoid receiving delivery of grenade-shaped items in the mail.

The subject of marketing saw a considerable discussion on Reddit and Matrix, and specifically what role the Treasury of a decentralized project like Decred should play in this.

@Checkmate has been stirring the pot of grassroots outreach and other ideas on Reddit, with regular and irregular posts provoking discussion that has also spilled over into some other marketing-related discussion posts. This month’s outreach braindroplets:

If you’re on LinkedIn, check the new dcrdex showcase page.

Warning: there is a strange Decredcash account on Facebook with a surprising number of followers (2.5K). Some latest posts appear legit, but the owner is unknown and the About page has suspicious account details and a mention of “masternode system”.

Thank you to everyone who voted and gave feedback. I’m very much looking forward to continuing the PR efforts and working with the community to raise awareness about the project. Lindsey McConaghy (@l1ndseymm)

The new Binance DCR/USDT pair quickly made it to the top 10 with a $50K 24-hour volume as of Aug 6, according to CoinMarketCap. On Brazilian NovaDAX, the new DCR/BRL dominates the other pairs with $5K daily volume observed on Aug 4.

@PermabullNino started the new Decred On-Chain Mini Pub series where he explores one metric at a time. Part 1 introduces several new metrics derived from BTC and DCR realized caps that reflect holder psychology and market over-/undervaluation. Part 2 combines realized cap and % of supply locked in the ticket pool to derive two new metrics unique to DCR that matched historical tops and bottoms with good accuracy. Part 3 looks at Decred’s difficulty ribbon and derives a new price metric against USD and BTC that has acted as a magnet for price in bear markets. As usual, all code to generate the charts is open on GitHub so that any interested researcher can reproduce the results or build on top of it.

@Checmkate observes that “There is a whole swathe of Decred onchain metrics that are lighting up right now”.

Cloudflare suffered an issue that took down many of the sites which rely on it, the effect could be seen on Bitcoin transaction volume, presumably because transactions from web wallets that rely on Cloudflare were not possible.

More than 75 companies in the blockchain and cryptocurrency industry don’t mind taking U.S. government backed payroll loans. These include such well known (and funded) outfits as Consensys (Ethereum) and the Electronic Coin Company (Zcash) - which already enjoys (part of) the 20% of ZEC block rewards. Opinions are split between those who think taking government-sponsored loans is at odds with cryptocurrency ideals and those who think they’ll be disadvantaged if they refrain while others help themselves. This demonstrates that even a well-subscribed ICO or ongoing 20% block rewards are not guarantees of a secure and sustainable funding situation, it is also necessary to manage spending and if possible establish some reserves.

Josh Concinnati announced he is resigning his position as Executive Director of the Zcash Foundation. The tweeted “letter” of resignation cites principles like “In open systems, those who help architect process which grant their organizations power should refuse to wield it” (Josh was involved in securing future ZEC block rewards for the Foundation, which only has a stipend from ECC in the current arrangement). The letter also indicates that a major reason for Josh’s departure is that his relationship with the ECC and capacity to work with them was irreparably damaged during the trademark dispute, which formed part of the negotiations about Zcash development funding after the initial period of 20% for ECC ends.

Josh also shared a piece of advice that applies to broader cryptocurrency and Decred: “beware relentless, unexamined positivism and near-religious zealotry”, “welcome serious critique”, “do not cargo-cult startup-ism into the core of your protocol, and resist attempts by others to do so”, and “question where influence truly lies and who wields it”. Check them in full in the original post.

Reddit’s “great scaling bake-off” (about scaling Reddit’s use of Ethereum) attracted considerable attention and many contributions, entries are being assessed in August.

Someone is complaining about Ethereum’s social governance processes on platforms like Twitter which the developers do not pay attention to, and calling for an all-in-one Ethereum governance platform “that effectively gauges the sentiment of the Ethereum community to ensure their voices are being represented”.

Ravencoin was subjected to an attack which exploited a protocol bug to print RVN without limit, outside the issuance schedule. The attack was enabled by a one-time pull request from a developer with no other history and exploited some time after being merged into production releases of the Ravencoin software. Once the vulnerability was announced and the fix released, new attackers emerged to exploit it while the network rushed to update enough miners within the first activation window. Much of the RVN minted by these new attackers was subsequently burned, as at least one of them revealed some personally identifiable information, and the lead Ravencoin developer threatened to (and in fact did) involve law enforcement. The attack was running for some time, minting RVN regularly, mixing it up, and selling it - 4% of all the RVN in circulation now was created (and sold) in this manner. As this extra RVN was outside the planned issuance, the Ravencoin community must now decide how to accommodate the extra RVN within the planned issuance limit. The subject was also covered by @BlockCommons on Twitter. This attack reminds the BTCP exploit we covered in Dec 2018 where a developer without a proven track record introduced a bug that was exploited to print a significant amount of coins. It is yet another reminder of extreme care that is required by the consensus code at both technical and social levels.

When Twitter was hacked to circulate a Bitcoin scam, thousands of people rushed to send Elon, Barrack and Kanye their BTC - in the expectation that these celebrities were going to double it for them. Coinbase prevented over 1,000 of their customers from making these transactions, demonstrating that perhaps some people might be better off not controlling their own keys.

Someone is impersonating Cointelegraph journalists to scam people, by offering to write stories for payment.

A Monero researcher funded by the Community Crowdfunding System (CCS) has found a way of doing BTC/XMR atomic swaps with recognized cryptographic primitives. The method does not use Hash Time Locked Contracts (HTLC) which are common in many forms of atomic swap but not possible on Monero. Instead, all of the logic for the swap operates on the Bitcoin end. The author cautions that while implementation now is possible this would be technically challenging, a new CCS proposal for this work may be forthcoming.

Binance announced that they will be adding “cold staking” although no coins have been announced yet. While “flexible staking” allows for immediate withdrawals, customers who participate in “cold staking” will be committing to lock their assets for a defined interval, with penalties for early withdrawals.

Hardware wallet producer Ledger announced that their marketing database had been breached, with 1M email addresses being leaked along with the full names and postal addresses of 9,500 customers. The only way to guarantee that your personal data will not be leaked is to never share it in the first place. This incident highlights the challenge of acquiring hardware wallets without compromising privacy. There is no such problem for software wallets that can be downloaded anonymously.

Russia is catching up on regulating crypto with the first bill giving crypto a legal status but banning its use as a payment method.

A new anti-encryption bill was introduced in the U.S. Senate, which would make law enforcement backdoors mandatory and forbid any offers of end-to-end encryption services.

This is issue 28 of Decred Journal. Index of all issues, mirrors, and translations is available here.