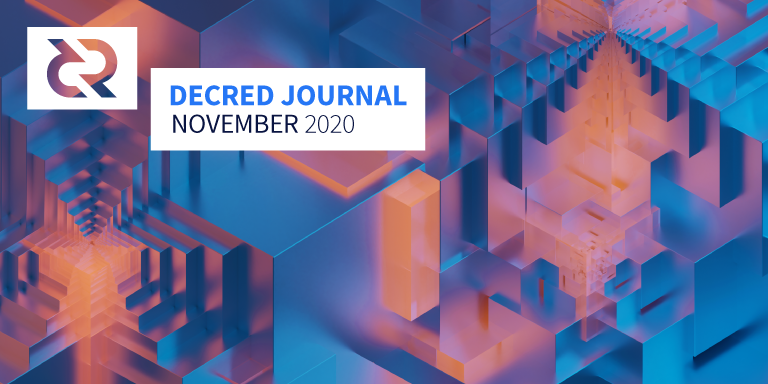 New release candidates have a lot of bugs fixed in all four parts of the upcoming v1.6 release. Get the latest RC binaries here (click Assets) and make sure to verify them.

Thanks everyone for helping to test the builds and move closer to the release of the epic v1.6.

Decentralized treasury consensus rules have been activated on testnet without issues.

Merged in master (work towards v1.7) and backported to v1.6 release branch:

Around 60 bugs were fixed in October and ~65 in November. The growing list of Decrediton’s features requires more testing firepower. Big thanks to all testers who help to improve Decrediton!

October’s porting of changes from the upstream lnd 0.11.1 included fixes of two vulnerabilities that may potentially lead to loss of funds. More background from the discoverer is here and here.

It is recommended to upgrade to the latest master or release candidate tag of dcrlnd.

Patch v0.1.3 was released fixing a possible client hang and a few smaller issues. Binaries are available as part of the v1.6 RC4.

A total of 37 PRs from 6 contributors were merged, adding 7K and deleting 4K lines of code.

Community stats as of Dec 1:

There were 4 proposals published in October, 3 have been approved and 1 has been abandoned.

Politeia Digest issue 39 has more details on the month’s proposals.

decredcommunity/proposals repository has been reorganized for consistent structure. The repo currently holds 52 updates for 13 proposals. Please submit updates for your proposals as it helps to collect them in one place (vs searching across chats and Reddit) and protect from loss. (summon @bee if you don’t want to face GitHub alone)

The ticket price once again reached new high of 188.85 DCR while stake participation (DCR locked in tickets) has hit an all-time high of 53.6%.

Welcome the new vsp.decredcommunity.org service that is running a mainnet instance of the new vspd software. As of writing it has ~70 live and ~30 voted tickets.

As of writing we have a total of 5 mainnet vspd services to choose from. Thank you all for supporting a more private way to stake.

Staked announced the closure of their Decred VSP for lack of economic viability. As of Dec 8, Decred is still featured on the site and VSP stats page shows 133 active users, 308 total users and 31 live tickets.

Hotbit Korea announced that they would list DCR/KRW market on Nov 26.

dcrtime was used by VotoLegal to record and timestamp donations to Brazil’s 2020 municipal elections campaign. According to Geek Insider, more than 24K donations have been tracked totalling more than $600K as of Nov 19. (discussion)

To address the longstanding challenge of spreading content and news, @Exitus and others have assembled a Marketing Workgroup in Telegram to help coordinate:

Thus far, it has proven to be a productive and a positive force. If anyone would like to participate and add value, please DM me.

Mastodon server launched by Stakey.net VSP for their support account is open to the Decred community via this invite link. Mastodon is an open-source, self-hosted microblogging alternative to Twitter and is part of the Fediverse.

Decred is now listed as a sponsor at gioui.org.

Decred in Spanish published 5th monthly report of activities and expenses for their second proposal that is ending in December. A big final report covering June-December was published together with the 3rd proposal to continue the effort.

Blockchain Learning Challenge (co-organized by Decred in Spanish and Talent Land Network) had 6 projects that made it to the finals. Participants published source code on GitHub and presented their projects in short video pitches. 5 judges have rated each project in 5 areas (how much data was used and how, how original and relevant for Decred the idea is, how easy it is to use the app, how finished the app is, and how well things are documented). Summary of the finals with all ratings and links is here, and the final award video is here.

@michae2xl published a report of his November activities for the Brazil Marketing proposal.

Spanish Decred events keep getting announcements at Cointelegraph in Spanish.

Our events repository that serves as a master source for event data above was upgraded with new “tech”. Now key info about events is saved in (mostly human-readable) YAML files, and requires writing less prose than full reports. Such structure allows us to generate a pretty website where each event gets a nice link with everything about it. This should help with reporting and knowledge sharing. To get your event listed please follow these steps.

Audio-only version of Staked Podcast is available on anchor.fm. Congrats on hitting 1,000 downloads/streams!

The TIE has demonstrated a correlation between the climbing DCR/USD and 30-day average tweet volume.

Those wishing to peek at DCRDEX without installing anything can check the 24/7 streaming on YouTube.

The replacement for P2SH in BSV’s Electrum wallet was found to be fundamentally broken, allowing anyone to spend coins held in multi-sig hashes on the BSV chain.

The Value DeFi protocol was hacked for $7M, although the attacker returned $2M to the contract address for unknown reasons. The exploit was executed with a flash loan, coming less than 24 hours after Value DeFi had tweeted (now deleted) to boast about robust security with “flash loan attack prevention”.

The OUSD stablecoin was hacked with a flash loan used to conduct a reentrancy attack, to print and rebase (debase) OUSD equivalent to almost the entire circulating supply, allowing the hacker to extract $7M in value.

A flash loan was also used to exploit MakerDAO’s governance system, by borrowing $7M worth of MKR tokens and using these to vote before immediately repaying the loan. MakerDAO’s response has been to disable certain executive functions in case an attacker is able to access them, and extend the cooling off period during which the community can respond to unexpected proposals passing. Such a weakness would not be exposed if MKR holders were required to lock tokens for some time in order to vote - or if the amount of MKR available to borrow was less than the amount legitimately engaged in the governance system.

The soft-fork implementation of Schnorr signatures and Taproot was merged to Bitcoin Core in October, but as yet there is no agreement on the method for activating the change on the network. There is also an unpopular argument that Taproot will make Bitcoin’s privacy situation even worse for regular users by introducing a yet another address scheme. Taproot will add a new type of Schnorr signature, which will allow for greater flexibility with multi-signature wallets and for these transactions to look the same as regular transactions.

The Ethereum 2.0 beacon chain deposit contract was released in early Nov and reached the target 540,000 ETH deposited on Nov 24, with the final 150,000 ETH coming just hours before a deadline set for a Dec 1 launch. The beacon chain is the first of 4 phases to the launch and migration to Ethereum 2.0, in this initial form the chain’s only purpose is to ensure PoS validators can remain in consensus.

The latest Bitcoin Cash hard fork occurred in November, this time the focus of dispute is funding for the ABC developers. This hash war had a clear winner, with the BCHN chain (no dev funding) attracting virtually all of the mining power. Ahead of the fork, over 1 million BCH was observed moving to exchanges (selling a risky asset and receiving split coins are two common reasons for doing so).

Ethereum network experienced a disruption on Nov 11. A recent version of Geth node software silently fixed a consensus bug that was dormant for over a year. Since it changed consensus code, it had a risk of an unintended hard fork. One vendor discovered the bug independently and seeing that the majority of nodes have upgraded, decided to test it in production and see what would happen. To everyone’s surprise, among the minority of nodes running old software was Infura, a popular service provider used by “dapps” to sync with Ethereum network. The bug-triggering transaction halted Infura and a bunch of “decentralized” finance apps that relied on it, including Metamask, MakerDAO, Uniswap, Compound, and others. Binance and other exchanges have also halted trading after noticing conflicting transaction histories. Infura resolved the issue within hours and posted a post-mortem explaining why they didn’t upgrade and calling out the danger of silent consensus fixes. Ethereum developer also published a post-mortem for Geth, which explained that the fix was done silently to not attract unwanted attention from attackers. Among other things, the incident teaches us that deploying critical fixes is challenging because it is a trade-off between informing good actors while not informing bad ones.

The Aragon project is in the process of decommissioning the ANJ token which was introduced one year ago as the token to use with “Aragon Court”, a dispute resolution service for Aragon DAOs. The ANJ token is now seen as a barrier to the success of Aragon Court, and will be bought out by the ANT holders by issuing ~1-5% inflation to the holders of ANJ.

US authorities seized 69,370 BTC (and forks) worth around $1 billion, apparently with the consent of an unnamed hacker who had stolen the funds from Silk Road in 2013.

This is issue 32 of Decred Journal. Index of all issues, mirrors, and translations is available here.