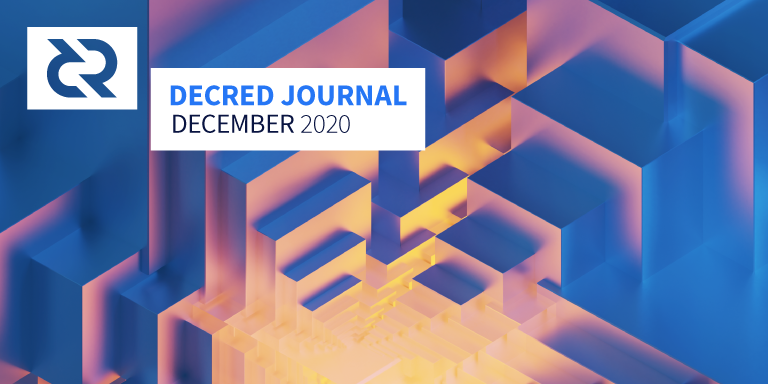 Merged in master and backported to v1.6 release:

A total of 51 PRs and 92 commits from 6 contributors were merged, adding 10K and deleting 8K lines of code.

In other news, there have been commits on Dec 30 and Jan 1 but thankfully none on Dec 31!

There will very likely be an RC5 soon fixing a few remaining issues.

The ability to retrieve the full timestamp (inclusion proof) for any piece of user submitted data has been added. Frontend work for this is still ongoing. The backend tlog branch is now feature complete and we’ll be starting the code review process.

A total of 28 PRs from 7 contributors were merged, adding 8K and deleting 5K lines of code.

Patch release v0.1.4 is getting close.

API for overlaying widgets is required to fully implement the intended designs for godcr. This was brought to the attention of the Gio team on their Slack and is being treated as a priority.

Community stats as of Jan 2:

A few highlights from the stats we track:

Thanks to Decred ambassadors on all platforms for raising awareness about the project!

Two proposals were submitted and voted on in December:

December is the last billable month for US, Latam and Brazil marketing proposals. Contractors working for them will need to submit renewal proposals to stay funded.

While December was a quiet month for proposals, there are already two new ones in January, for renewed funding of DCRDEX and Decred in Depth (under new management).

Politeia Digest took a break in December but will be back soon.

Another month, another high broken. Ticket price peaked at 190.9 DCR and stake participation at 54.2%.

@Checkmate reports via Our Network newsletter that a number of on-chain metrics are hitting all time highs.

Mainnet Lightning Network is slowly growing. Throughout 2020 there was an average of 15 nodes, 30 channels and 6 DCR capacity. As of Jan 8 there are 24 nodes, 42 channels and a total capacity of 8.7 DCR according to @jholdstock’s LN map.

Note that Ultravsp had to migrate from ultrapool.eu to a UK domain ultravsp.uk due to the Brexit domain mess, and there will be no automatic redirection due to prohibitive complexity of setting it up. VSP users who bought tickets recently have been notified via email.

Bittrex added an instant exchange feature that allows users to quickly buy assets with a debit card or exchange’s fiat balance. DCR was reported to work.

Binance has enabled margin trading for DCR/BTC and DCR/USDT, and announced a 1-week “zero-interest promotion for borrowing DCR”. (discussion) :supervillain:

Turkish exchange Bitexen announced the listing of DCR among 11 other assets.

Malta-based instant exchange aggregator Swapzone has DCR support since May or earlier but in December it got on our radar and was added to decred.org exchanges page.

Decred in Spanish team published the final 6th report for their 2nd proposal. Voting has ended for their 3rd proposal with significant 54.5% and 50.2% Yes votes but did not reach the required threshold of 60%. The team is collecting feedback on Reddit and planning what to do next.

The information above is available in greater detail in our events tracker that is being built to learn what works and improve reporting of marketing efforts. Thanks to everyone submitting and reviewing events.

Decred Project not only aims to provide an alternative to financial systems that depend on a trusted third party and to people that depend on the good will of giant financial institutions but also to show how e-voting may happen in a secure and transparent fashion.

Code in Python/R/SQL used in the research is available on GitHub.

With the massive Bitcoin runup, Decred has also been raising in USD without losing much ground in BTC value.

DCR was trading unusually high up to $350 on Upbit until it was delisted there.

During the 48 days of DCRDEX operation it has traded ~600K DCR, which is 30% of Binance volume over the same period. Unlike any centralized exchange though, this volume is much more reliable and harder to cheat.

Staked Realised Value is a metric that is analogous to the Realised Value but applied exclusively to coins circulating within the ticket pool, essentially treating every ticket as a UTXO. [it] provides a more accurate valuation of the capital locked into the security and governance of the network. During past sharp sell-offs it has acted as a psychological bottom - the point of maximum pain, where the buyers of last resort step in.

@Checkmate announced the launch of checkonchain.com with many, many (many) charts:

Now this is something I have been working on for a very long time. If you want serious edge in this market, pay attention to the beating heart of the chain. A full blown masterclass to learn how to properly apply each metric is coming in hot soon after.

The Cover Protocol, a DeFi insurance project which “allows DeFi users to be protected against smart contract risk”, was hacked and the attacker minted 40 quintillion COVER tokens, liquidating these for $4 million, but later returning the funds to the smart contract. The team are now looking at creating a new version of the COVER token with a snapshot to refund COVER holders, because otherwise those extra 40 quintillion tokens would mess up the tokenomics.

Nexus Mutual’s CEO was hacked for $8.3 million when an attacker tricked him into signing a transaction that sent all his NXM to the attacker’s wallet. The attacker laundered $2.7 million to BTC, and this sent the NXM price lower, they then sent a message on the Ethereum blockchain offering to return the rest (so NXM could avoid further pain) for a ransom of $2.8 million in ETH.

December’s top DeFi rug pull was Compounder finance, whose devs absconded with $10.8 million of investor funds after utilizing a hidden backdoor in the contracts.

December’s top flash loan attack victim was Warp Finance, with the exploit weighing in at $7.7 million, but $5.85 million is being returned to holders. This is arguably December’s top DeFi hack refund too, but COVER is a contender for that title because although the dollar amount being returned was smaller, it represented a ridiculous proportion of the COVER supply.

A bill was introduced in US Congress that would require stablecoin issuers to obtain bank charters, requiring approval from the Federal Reserve and various other bodies before circulating any coins.

The front line in crypto regulations then shifted to “self-hosted wallets” (i.e. any self-custodied crypto) and the degree of due diligence that exchanges are required to carry out on transactions involving these questionable entities.

Bittrex announced that it will be delisting privacy coins Monero, Zcash and Dash on Jan 15, without stating a specific reason. Around a month before that the same coins have been delisted by ShapeShift.

Bittrex also became the eleventh exchange to delist XRP, a week after US SEC charged Ripple Labs with raising $1.3 billion by selling the coin in unregistered securities sales. This reminds that raising funds is a long-term systemic risk that may backfire years after the ICO.

In an effort to shake off regulators, Facebook’s Libra rebranded to Diem and dropped the aspiration of being backed by a basket of currencies in favor of straight USD backing.

Ledger’s leak of customer data, originally reported in July, has now been dumped publicly. In the original announcement Ledger stated that more detailed information such as physical address had been accessed for 9.5K customers, but it seems now that this information was harvested for 272K customers.

Support DJ on the web!

We don’t know what you guys did but November DJ was an anomaly. 100+ Twitter likes up from average 60, 1K+ Medium claps vs regular ~300, hitting top 10 December posts tagged “DEX” on Medium, good views on Publish0x, and so on.

Thank you for pressing all these buttons! Please keep going to bring visibility for the best cryptocurrency project.

This is issue 33 of Decred Journal. Index of all issues, mirrors, and translations is available here.