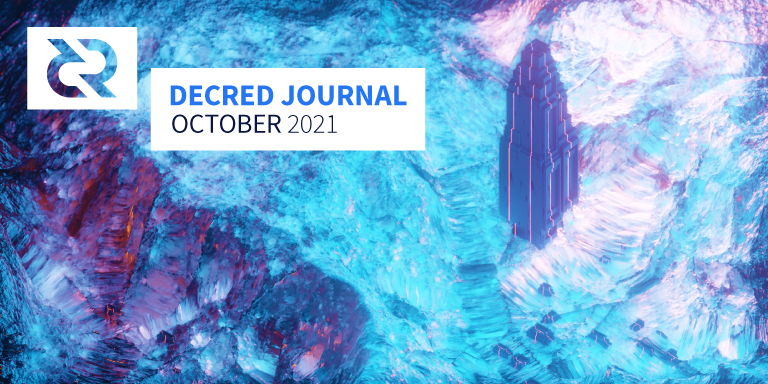 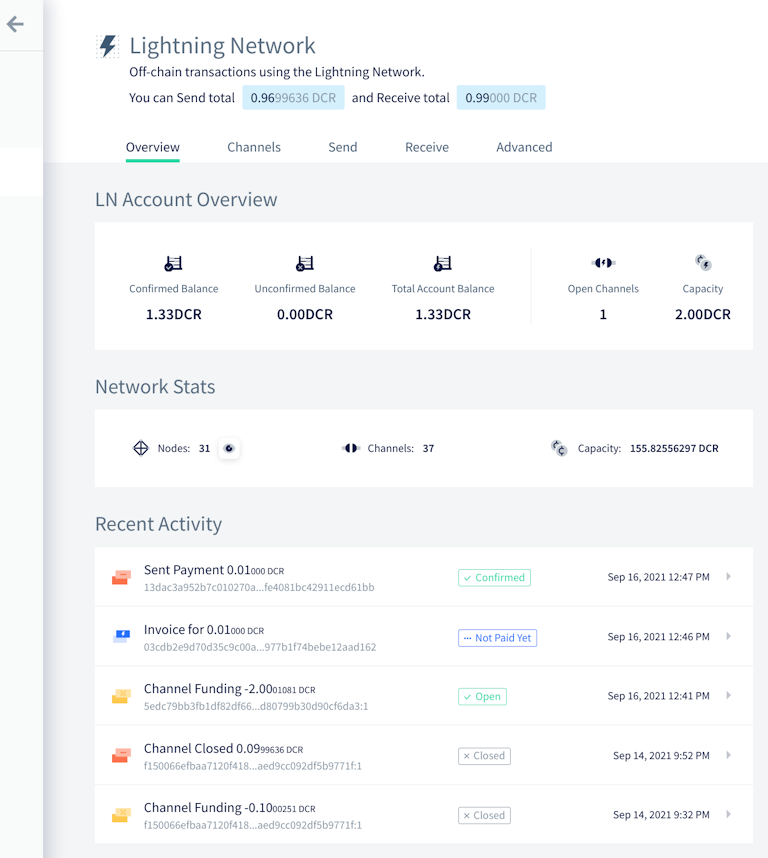 Refactoring in preparation for the user layer rewrite (largest chunk of work for the 2021 Q3 proposal): 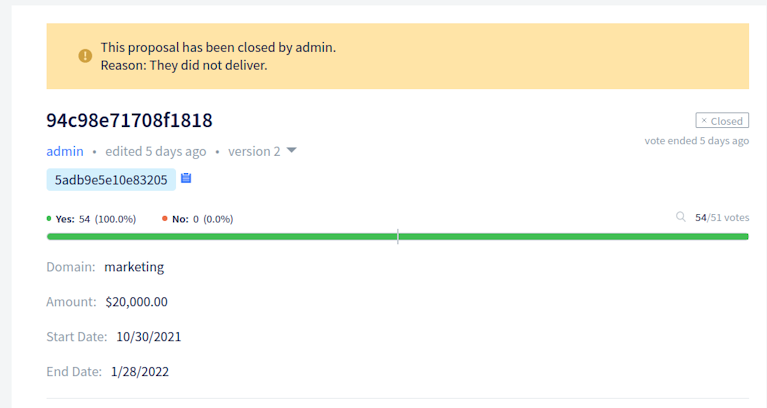 No free money on Politeia 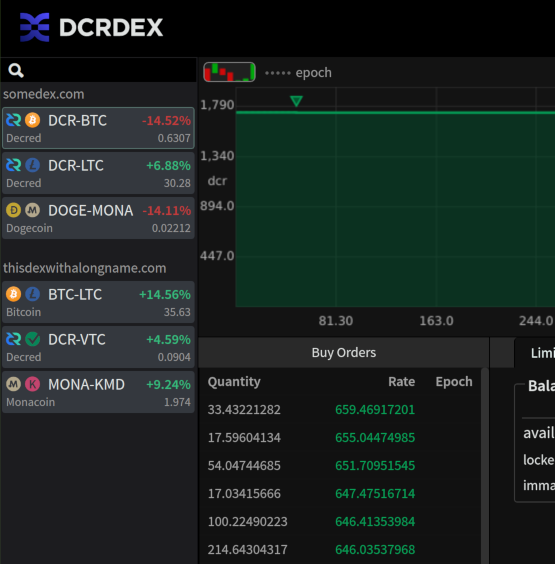 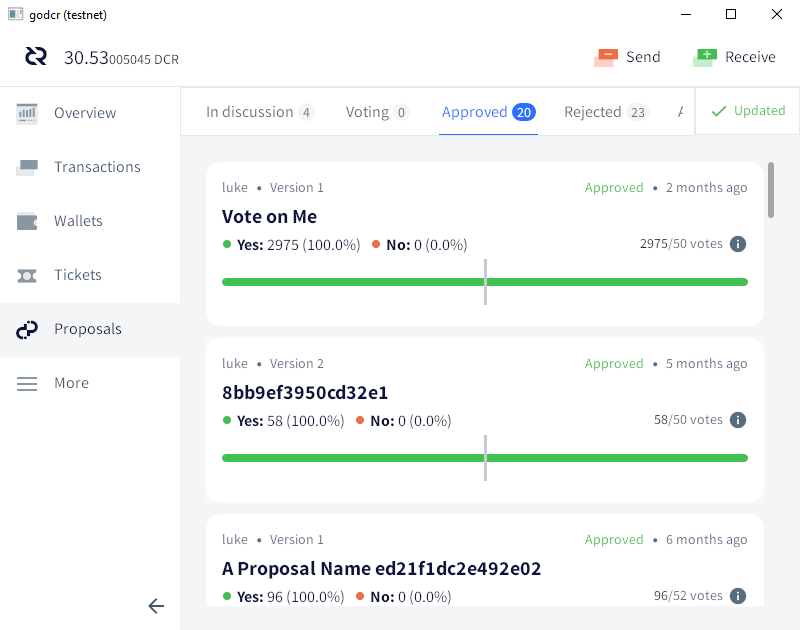 Development continued despite the second GoDCR proposal getting rejected (49% Yes). Looking forward to the revised version and new app builds.

Community stats as of Nov 2:

One proposal was submitted this month, @ammarooni returns with a proposal that revises an earlier book proposal to remove the book in favor of a steady stream of papers and social media content, memes and meetups.

The two proposals from @raedah were voted on this month, the one for mobile wallets was approved with 97.2% yes votes and 66% turnout, while the proposal to continue funding GoDCR was rejected with 49% approval and turnout of 73%.

See Politeia Digest issue 47 and issue 48 for more details on the month’s proposals. 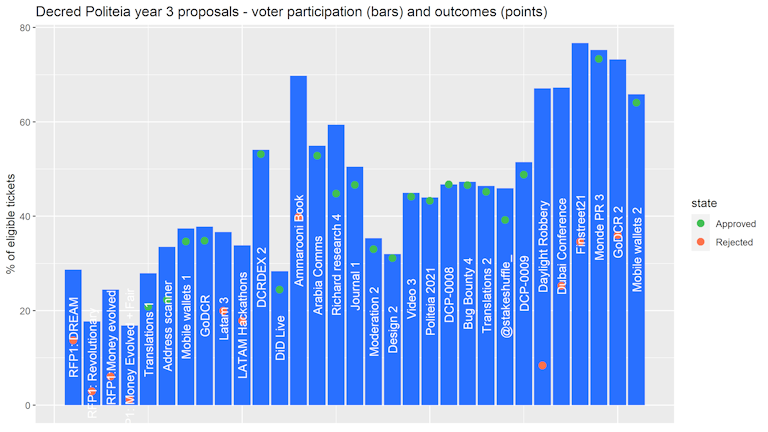 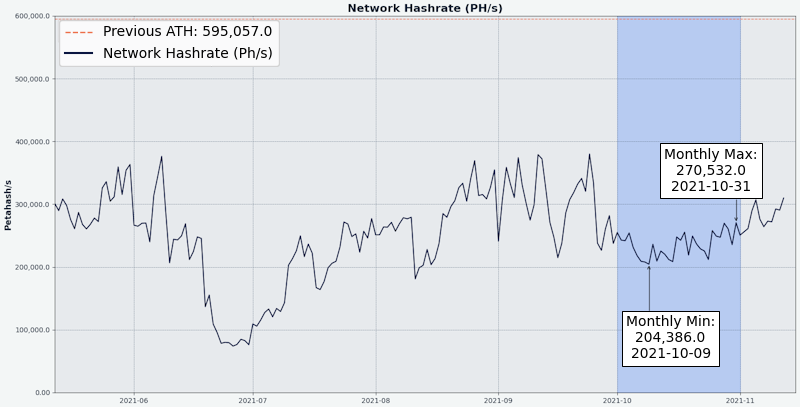 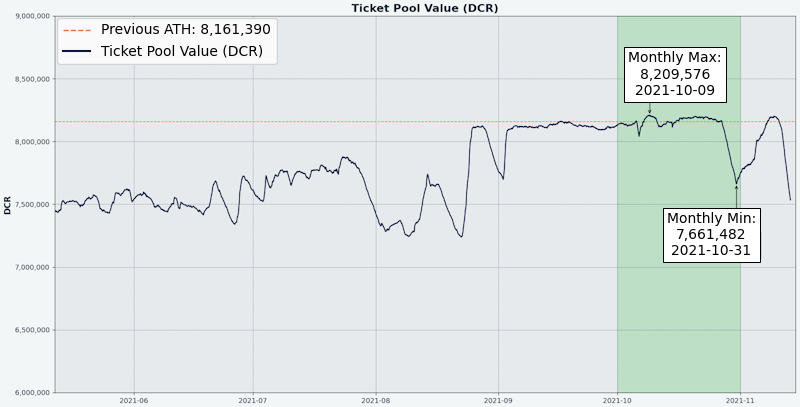 Nodes: Throughout October there were around 200 reachable nodes according to dcrextdata.

The share of mixed coins varied between 52.3-54.4% and set a new all-time high with the sum of mixed unspent coins above 7.3 million.

Legacy VSP stakepool.eu has been removed from the VSP list to facilitate user migration to the new vspd system. It is still online to vote on the remaining live tickets (7 as of Nov 1). This VSP launched in May 2016 with the codename India, just 3 months after Decred was born. Thank you for 5 years of service!

Legacy VSP from 99split.com has handled its final live ticket and was shutdown. It has served since late 2019 and was one of the few vendors to actively support ticket splitting by coordinating sessions and creating user-friendly video tutorials. Users are welcome at its new vspd instance with a 0.99% fee and 1.7K voted tickets.

For anyone still using legacy VSP, it is recommended to switch to vspd providers to avoid the risk of missed tickets, e.g. in case the legacy VSP shuts down or stops working with the coming consensus upgrades. As of Nov 1, all legacy VSPs managed less than 260 tickets or 0.6% of the ticket pool.

In response to a common question “What’s up in Decred and where it is heading?” @bee wrote a summary of recent developments and mid-term goals.

👂Ever heard of the great #Decred hack?

How about the recent #Decred rug pull?

Yeah, me neither because they don’t exist.

Congrats to the team, stakers and visionaries. 🎖️ (@cryptotivo)

@tacorevenge published the second part of an investigation of The Suppressor entity that is suspected of manipulating DCR markets. This time on-chain analysis was used to see how funds have been flowing between miners, centralized exchanges and DCRDEX.

Zcash has been polling its coinholders again, this time on the subject of whether to change the consensus mechanism away from Proof of Work. 85% of the 41,000 ZEC (0.3% of circulating supply) that voted put a switch from PoW as the number one priority for the project. The aim is to move away from Proof of Work entirely, to some form of Proof of Stake or equivalent.

Sam Altman and other Silicon Valley VCs revealed their vision for a universal basic income that people must submit unique eyeball hashes to claim, and privacy advocates have piled on to say it’s a bad idea. Notable features are the orb-shaped eyeball scanners reminiscent of dystopian science fiction, and the 20% VC premine.

The latest DeFi airdrop farming controversy concerns Ribbon Finance, where one researcher from Divergence Ventures successfully met the qualifying criteria with hundreds of different wallets and received tokens worth $2.5 million. An independent researcher noticed the pattern and identified the wallet owner through association with an ENS domain, they suggested copytrading them on Twitter, but it blew up and Divergence Ventures ended up giving back all the airdropped tokens.

Cream Finance has been hacked for $130 million, which is the second major hack in the last 3 months. This attack used a flash loan to repeatedly lend and borrow funds across two addresses and took advantage of a pricing vulnerability to drain many of Cream’s liquidity pools. Analysis by a DeFi insider suggests that this hack was executed by a skilled DeFi developer, likely working on a rival project. The attacker also left a cryptic message which appeared to taunt a list of projects and blame Yearn developers, and some DeFi developers have started referring to a “war” in their tweets.

The DeFi protocol Indexed Finance was hacked for $16 million, but identified the attacker. The story of how the attacker was identified is an interesting one, involving an edit to Wikipedia which they made to describe themselves as a “notable mathematician”. It subsequently transpired that the attacker is a teenager, and rather than hand the funds back, or 90%, they have decided to test the “code is law” conjecture in court to see if they can keep their flash loan bounty.

The Creature Toadz NFT community was scammed by an attacker who posted a fake minting link in their Discord - in the 45 minutes before it was taken down 88 ETH was sent to the attacker. The funds were quickly returned after the hacker’s identity was discovered.

In the dog eat dog world of dog money, AnubisDAO executed a speedy rug pull with $60 million of investors’ money, 20 hours into the initial token sale for this new dog token with no website. There is some dispute over whether the attack was executed by a project insider or someone who phished a project insider.

A new crypto news wire has launched, and it is run by a DAO, PubDAO.

Popular patronage service Patreon is considering to drop the ban on its users offering and promoting social tokens on their platform.

The infamous $1 trillion infrastructure bill has returned to the house of representatives and someone has discovered an even more egregious anti-crypto provision: 6050I. This provision would require recipients of digital assets to, in many cases, collect a variety of information about the sender and report this to the IRS within 15 days. This provision has only recently been discovered, but it is apparently already too late to do anything about amending the infrastructure bill on its passage through the house of representatives.

The latest crypto fad is not a new blockchain but small blocks of tungsten, which people are buying to touch and hold. It didn’t take long for someone to come up with a Tungsten DAO which has minted an NFT representing a very large block of tungsten, and sold this for $250,000, to a holder who is entitled to visit it once a year for looking and touching (it’s too heavy to hold or deliver).

That’s all for October. Share your updates for the next issue in our #journal chat room.

This is issue 43 of Decred Journal. Index of all issues, mirrors, and translations is available here.