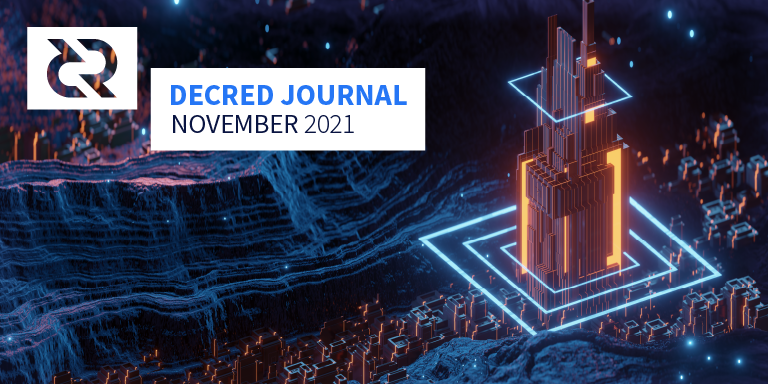 A minor bug in consensus has been fixed where tickets voting on treasury spends have not been detected as voted and were falsely reported as missed in some RPC requests. Importantly, the bug cannot cause an unintended fork and only affects data served via RPC. The live ticket pool is still accurate and all votes and payouts are unaffected. The fix will require a database migration.

Welcome uint256, a new package implementing highly optimized allocation-free 256-bit integer arithmetic. It has the potential to speed up the initial chain sync by 5-10% when used in place of the standard library big integers. The package has a strong focus on performance and correctness, and features arithmetic, boolean comparison, bitwise logic, bitwise shifts, conversion to/from relevant types, and full formatting support - all served with an ergonomic API, full test coverage, and benchmarks. For a full dose of hacker’s delight, follow how it came into existence over 59 commits with a thorough README at the end.

The uint256 package became the first step of a long-term plan to develop a new primitives module. It will become a new fundamental building block of consensus code by consolidating key concepts such as transactions, block headers, blocks, and sequence lock definitions, which are currently spread across multiple packages. Refined abstractions will improve clarity by making the distinction between consensus primitives and the data sharing protocol, and allow for significant performance optimizations.

Progress of the stdscript package (an effort to decouple “standard” from “consensus” script handling, to avoid unintended changes to consensus): 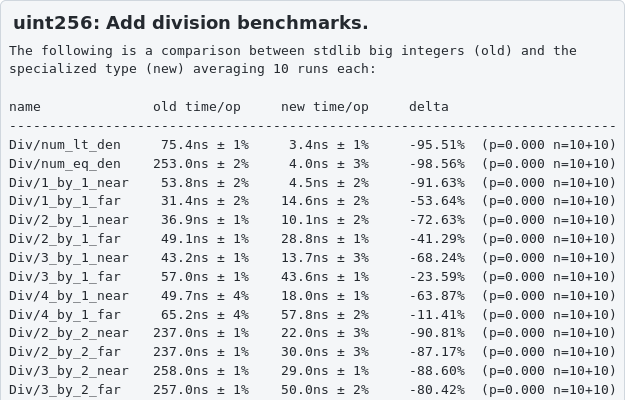 Another day of optimizing dcrd

Changes in the pi-ui library (shared by Decrediton and Politeia):

For more details check the release notes in politeia and politeiagui repositories, or the quick Twitter walkthrough by @lukebp.

A notable feature of Politeia development is a formal pre-release step to test all changes in both the backend and the GUI.

dcrpool is server software for running a mining pool. 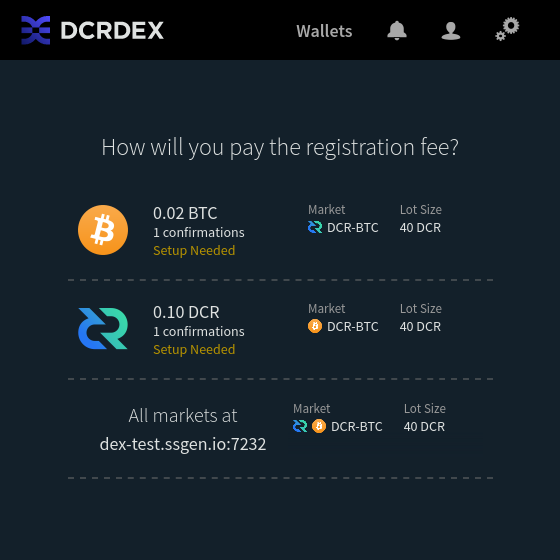 Pay reg fees in other coins to save more DCR

Hello, after careful consideration the Planet Decred team has determined that we are going to delay the GoDCR proposal v2 until we have a mainnet release. Because of this, please look for the v2 GoDCR proposal to post sometime in January. 1.0 mainnet GoDCR should be finished by the end of the year. (@monsa00 on 2021-12-02)

dcrros is a middleware service that provides access to the Decred network via Rosetta API.

Community stats as of Dec 1:

The proposal for Economic Education and Outreach from @ammarooni was rejected with 33.6% Approval and turnout of 70%. However, this wasn’t the end of the story as Ammar put up an address for donations, and this quickly hit the target of $12K via 30 different transactions. He is now “charged up like a bison” and ready to deliver the proposed program.

If you use politeiavoter to trickle in your proposal votes, make sure to upgrade to the v1.3.0 politeiavoter before the next round of voting. Retrying failed votes may not work properly if you don’t. (@lukebp) 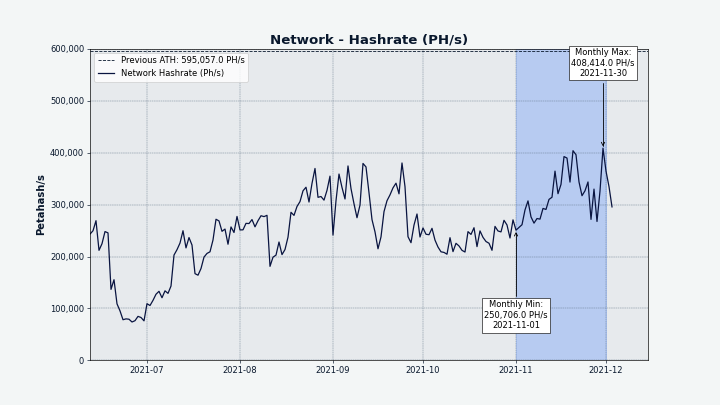 After a large drop in stake participation and ticket price, the following ticket buying has sent the price to a new ATH of 327.8 DCR.

Nodes: Throughout November there were around 186 reachable nodes according to dcrextdata.

The share of mixed coins varied between 52.9-55.1% and set a new all-time high with the sum of mixed unspent coins above 7.5 million. 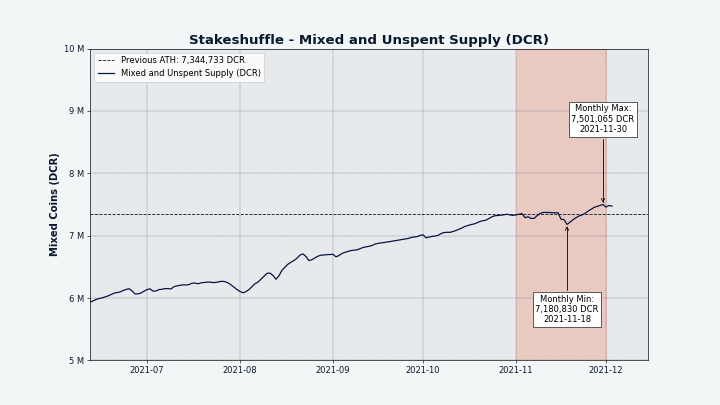 Chinese mining pools have experienced disruption as a result of Internet censorship and DNS issues, and some have launched alternative domains in response. This seems to have caused some redistribution of the Decred hashrate, while the total hashrate has not been affected much.

F2Pool announced that it will shut down operations in mainland China by the end of 2021. This was followed by the closure of mining pools for several coins including XMR, although the DCR pool has been online with 46 Ph/s as of Dec 1.

Ledger Live users have reported problems with sending DCR from this wallet. Due to incorrect fee calculation, the transactions would get stuck in the mempool and lock coins. A workaround was found where coin control feature could be used to unlock the funds.

Someone has reported that DCR became the major component (27%) in the PRIV index at FTX, which tracks 9 privacy coins, although this appears to be due to a failure to rebalance what is intended to be a market capitalization weighted index.

Decred now has an Odysee channel where YouTube content has been mirrored, just in case. As a bonus, it allows watching Decred videos without visiting YouTube and Google. Odysee is powered by LBRY, a decentralized protocol for fair and robust content distribution (with optional monetization). Please consider supporting Decred videos if you use this platform.

October Decred Journal had an experimental custom announcement on Decred’s Instagram page, in addition to all existing channels. Veteran Instagram users are welcome to support the account or advise how to grow it.

Last but not least, someone has registered an OnlyFans account for Decred. It is hard to comment any further.

You need to understand yourself, and that the journey will be a never-ending learning experience. There are three traits you will also want to cultivate if you want to have any chance at success in my view: patience, discipline, and focus. As with any type of investing these will determine your outcome. (@jz) 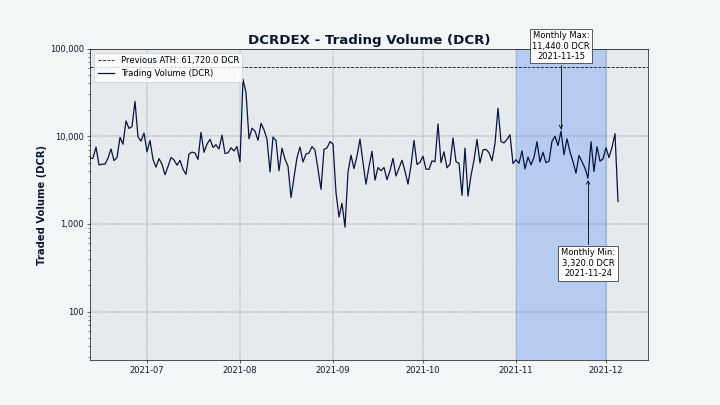 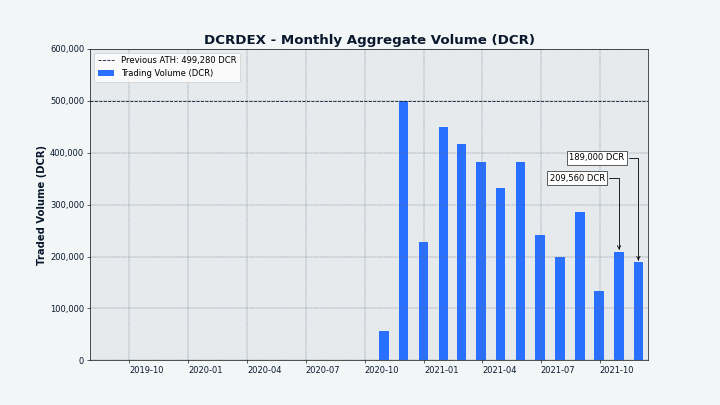 Binance froze DOGE withdrawals after apparently processing a batch of old withdrawal requests accidentally after an upgrade. Binance users reported being asked to return DOGE that was not in their accounts and being informed that they would no longer be able to make withdrawals until they return the DOGE. Elon Musk contributed to raising awareness of the issue by criticising Binance on Twitter. Binance later published their version of the story confirming that the problem was due to upgrading their wallet while it had old stuck transactions, which were then rebroadcast successfully. The explanation states that withdrawals of DOGE were down for 17 days so they could “re-build the wallet”.

The ECC has presented a new Zcash road map which would see the project shift to proof-of-stake consensus over the next three years, with a focus on cross-chain interoperability and integrating governance features in the wallet. The other area being explored for Zcash is “shielded assets”, representations of other assets on the Zcash chain, but the report is on the fence about whether this would be beneficial and worthwhile. These priorities had been informed by voting of forum members and coin holders.

Polkadot held a token vote to decide on the future of their brand, it followed a quadratic voting method which diminished the weight of whale voting accounts and voters picked between two logo and identity directions. The choice of directions was purely aesthetic. The process to revise these assets began in December 2020, it was funded with a budget of 10,000 euros. The final vote to choose one of the competing designs was conducted on a bespoke page and likely marks the first time that most of the 2,097 accounts voted - as the voting interface for funding proposals is much less accessible.

A community of crypto investors formed ConstitutionDAO to try and buy a rare copy of the US constitution, raised $40 million in ETH but then lost the auction to hedge fund CEO, Ken Griffin. This caused a lot of uncertainty about what would happen to the contributed funds, with a new token being announced and cancelled, and the price of the PEOPLE token which contributors to the DAO had received fluctuated wildly. The project ultimately decided to wind down as no agreement could be reached on how to move it forward without the copy of the constitution, contributors can reclaim their ETH (but transaction fees will consume most or all of this for many of the smaller scale contributors) or claim their PEOPLE tokens.

Meanwhile, the EU’s approach to regulating crypto-asset markets appears to be proceeding in a more measured fashion and drawing a much clearer boundary around what and who is being regulated.

The NFT concept and its fans have been provoking adverse reactions from some online communities - Creative Commons and Discord have distanced themselves from NFT-related material, while an NFT project for young writers was scrapped after a Twitter campaign against it.

Square announced a white paper detailing its proposal for a decentralized exchange, tbDEX. Square then changed its name to Block.

ETH has been added as a currency option by Sothebys auction house, with live ETH bids being accepted during the auction and displayed on the feed - payment can also be made in BTC, USDC, or fiat currency.

Two of the Wyoming-based “DAOs” have been prevented from registering digital tokens as securities by the SEC because they provided deficient paperwork.

That’s all for November. Share your updates for the next issue in our #journal chat room.

This is issue 44 of Decred Journal. Index of all issues, mirrors, and translations is available here.