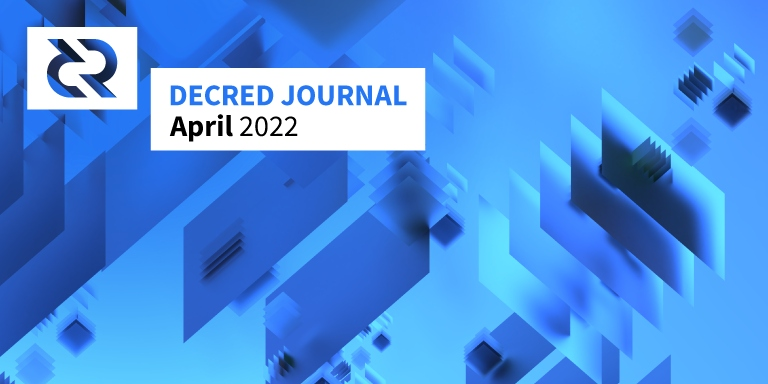 DJ is back! This issue covers April news, with a few exceptions.

More progress made towards the primitives module:

Decredition v1.7.2 has been released on May 11 with over two months of improvements and fixes (including everything reported below). Users are urged to upgrade. Check the release notes here. As always, verify the downloads before installing. 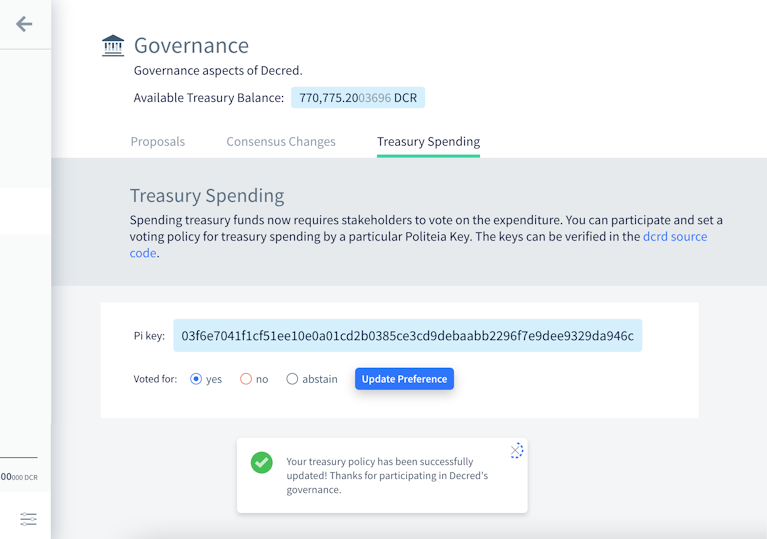 Voting on Treasury Spending is now in Decrediton! 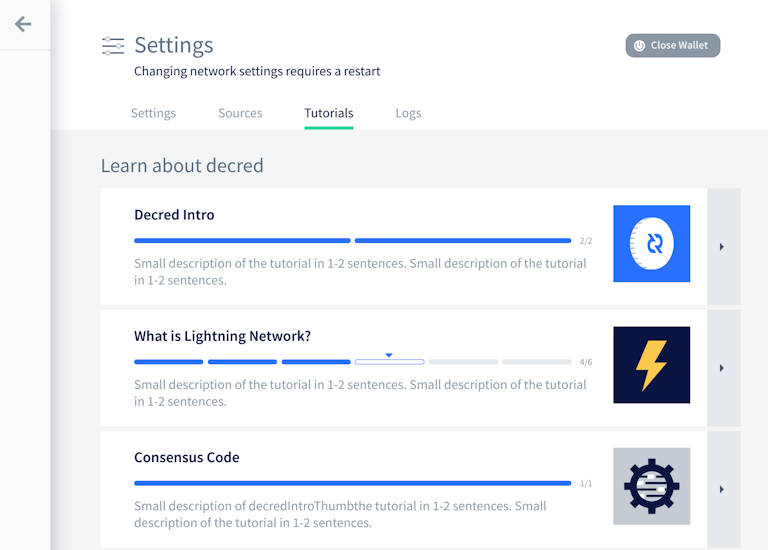 R&D to replace single-server CoinShuffle++ with a peer-to-peer model has been announced:

we will begin simulating this (p2p cspp vs single server) soon.

the expectation is that dealing with registration and timeouts will be messier, but it should be possible. afaict, the main threat model is partitioning attacks, whether external or internal. [@behindtext, 2022-03-24]

DCRDEX development is on fire. SPV mode is now completed for use in Decredition. Dogecoin has been added. Zcash and Ethereum are making steady progress on testnet. Tor hidden service support is ready. The registration UI, which was a bit confusing for some, has been clarified.

v0.5 is shaping up with a lot of big changes. Loads already merged, but under review presently are swap acceleration with CPFP transactions, mixed DCR account support, support for LTC’s MWEB release, Zcash, Electrum wallet support (SPV for many assets with existing/external wallets), and of course ETH on mainnet which we have been holding back from prime time. [@chappjc, 2022-05-13] 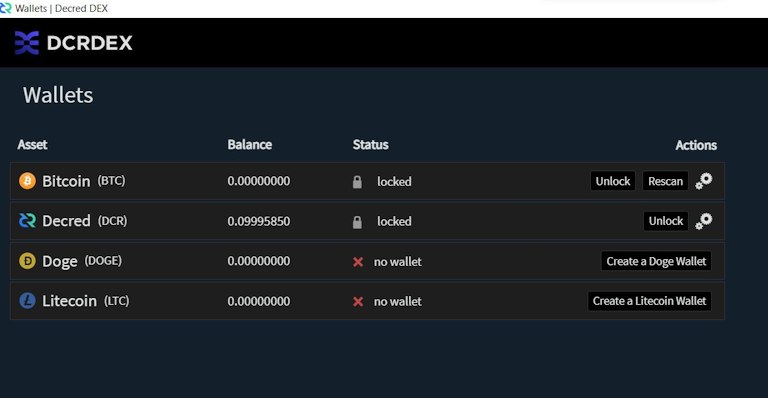 Keep your DCR balance to yourself!

GoDCR v1.7.0 has been released on May 11! This is the first Mainnet release after almost 8 months of development and polishing since the v0.9.0 Testnet release. Get the downloads and release notes and verify that it was really signed by release@planetdecred.org (key ends with A3C9EB3218CCC3E8). 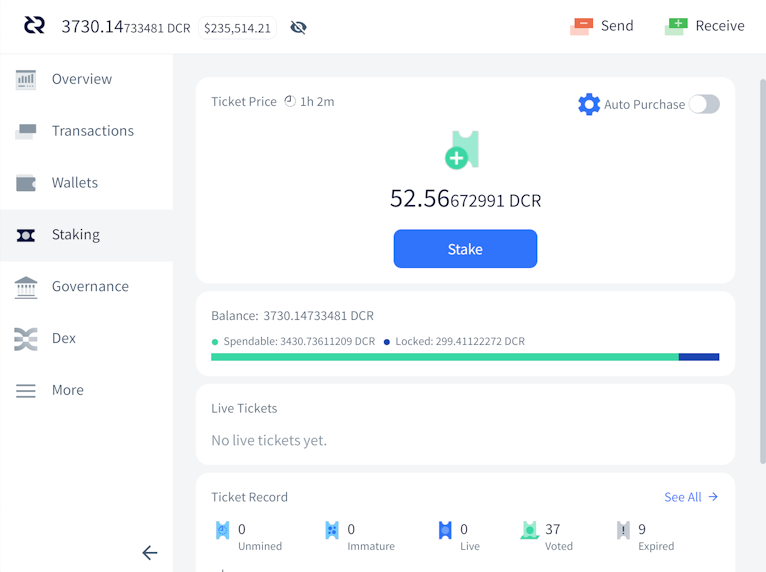 The Decred News Updates have a new face. @Dajana_DCR is now helping @Exitus as a news host, changing things up! Her debut video received over 1,000 views and 101 likes.

Community stats as of May 2 (compared against statistics from December Journal):

In Feb-Mar, around 617K DCR was transferred from the legacy treasury address to the new treasury account that requires stakeholder approval to spend from.

Since the last issue of Decred Journal (December 2021), there have been four proposals published on Politeia, all approved.

The proposal for continued development of Politeia with $138,600 was approved in March with 97% support and turnout of 55%. This sees Politeia development funded until July 2022.

A proposal by @Exitus to fund video content production with $32,000, covering the remainder of 2022, was approved in March with 98% support and turnout of 55%.

A proposal to continue with phase 2 of @StakeShuffle_ the Twitter bot with $1,684 was approved with 96% support and turnout of 55%.

The proposal to continue phase 3 of DCRDEX development with $370,000 was approved in January with 97% support and 57% ticket turnout.

All of the consensus changes deployed as part of the v1.7 release were approved by voters with very similar voting outcomes: 99.9% approval of the 60% of tickets that voted (as opposed to abstaining, which ~40% did), there were just 61 votes against the subsidy split change (vs 23,664 Yes votes). Considering the opposition to this subsidy split proposal which was voiced in some quarters, the outcome suggests that the complaining parties either didn’t have (m)any tickets or chose not to vote No with them for some reason.

The changes activated on May 8, so along with the new subsidy split (DCP-10) there are fixed treasury spend policy (DCP-7), explicit version upgrades (DCP-8), and automatic ticket revocations (DCP-9).

63.03% of the supply staked represents a new all time high! 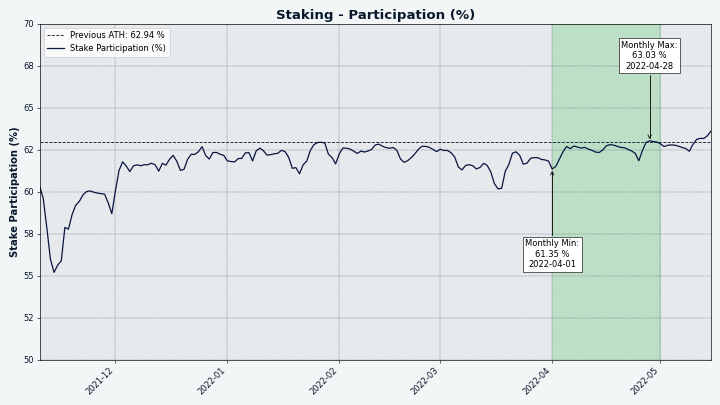 Legacy (dcrstakepool) tickets can no longer be voted since May 8 when the chain forked to the new rules. On May 10, the 7 listed and 1 unlisted legacy VSPs collectively reported 125 tickets but this figure is outdated. 5 of these VSPs have stopped voting between May 2021 and Feb 2022. The 3 remaining VSPs to operate till the very end had 27 live tickets on May 8. coinmine.pl, decredbrasil.com, and stakey.net showed to be the most hardcore.

Nodes: Throughout April there were around 175 reachable nodes according to PD Analytics.

A new VSP titled big.decred.energy run by @DCR_uncle is in the process of being added to the official VSP list.

Full nodes are the backbone of Decred. By validating and broadcasting transactions without relying on third parties they help keep the network decentralized. Each full node added to the network adds to its security and robustness.

Meet decredsociety.com - a new website dedicated to Decred related ideas, news, and other aspects by @phoenixgreen. @Applesaucesome will also be posting technicals and other information related to Decred’s markets.

A new monthly LiveStream initiative has been started by @phoenixgreen and @Exitus called “Decred and the State of the Market”. Any eager community members are welcome to join!

Please post yours memes in the #DCR Memes channel on Discord or Matrix!

DCR rallied by nearly 45% to over $86 in one day on April 18th, its highest level in four months. This pump was unfortunately short-lived. 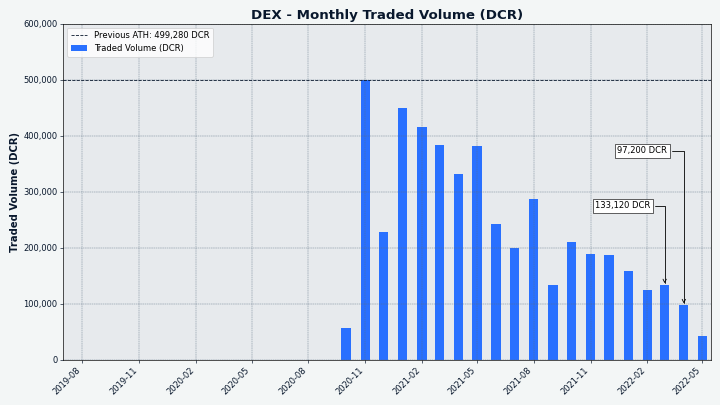 The latest big news which seems to be affecting the crypto markets is related to the collapse of LUNA and de-pegging of its associated stablecoin (UST) - and there are claims this was driven by an actor who short sold the tokens to profit from this eventuality. The latest development at time of writing (May 12) is that the Terra blockchain has been halted to prevent governance attacks because the value of LUNA had fallen too low and the whole blockchain became vulnerable, validators will coordinate to restart the chain. This is the most significant failure of a “stablecoin” to maintain its value so far, as LUNA had reached a valuation of $41B which put it in the top 10 crypto market caps, but quickly lost 97.5% of this value as UST de-pegged and it emerged that founder Do Kwon had been behind several other failed stablecoins pseudonymously. This disaster is still unfolding but it seems set to result in major losses for people who invested in the Terra ecosystem and trusted its stablecoin concept - it is also already drawing increased regulatory attention on the stablecoin and DeFi space.

In April, the JUNO community voted to confiscate millions of dollars of tokens from the wallet of user who was accused of gaming the airdrop to receive 10% of all airdropped tokens. After an initial sentiment poll in March which favoured revoking the whale’s tokens the holder came forward and claimed that the tokens belonged to his clients. However the vote to block access to all of the user’s tokens was passed with 74% approval, he has said he is considering legal action if the tokens are not returned to the clients who own them.

The Ronin Bridge, associated with Axie Infinity play to earn game, was hacked for $600M in March, when an attacker gained access to the private keys of 4 validators run by Sky Mavis (game creators) and one by “Axie DAO”, and this was enough for them to take control and steal the funds. It seems the attackers also tried to profit on their attack by shorting the RON and AXS tokens, but because nobody noticed the missing funds for a week the attacker’s short position got liquidated before the news broke. In April the Lazarus Group in North Korea was revealed by Chainalysis to be the beneficiary of the hack.

Yuga Labs have been busy in 2022 - acquiring the rights to Cryptopunks NFTs and making these match BAYC terms of use and launching the APE token to serve as a currency for their ecosystem in March, then issuing deeds to land in the BAYC metaverse (Otherside) in April. The Otherside deeds launch was successful in raising $285M for Yuga Labs, but it was widely criticised for a poor launch mode and implementation which saw users spending $180M in ETH fees in a gas price auction on poorly optimised smart contracts.

Cryptocurrency has featured in a number of ways in the conflict between Russia and Ukraine, with Ukraine already having quite a developed crypto policy and stance before the Russian invasion. In the early days of the war the Ukrainian government called for and received crypto donations, and one month in had received over $100M in donations this way. However, by April the Ukrainian government’s tone towards crypto had shifted and the prospect of capital outflows weakening the national currency led the government to ban the purchase of crypto with the local currency, and limit purchases with foreign currencies to $3,300/month.

The prospect that Russia might use crypto to evade financial sanctions received significant coverage but it seems that there is little sign of Russians state use of crypto, although the number of smaller retail level transactions has grown substantially since early 2022.

That’s all for April. Share your updates for the next issue in our #journal chat room.

This is issue 46 of Decred Journal. Index of all issues, mirrors, and translations is available here.