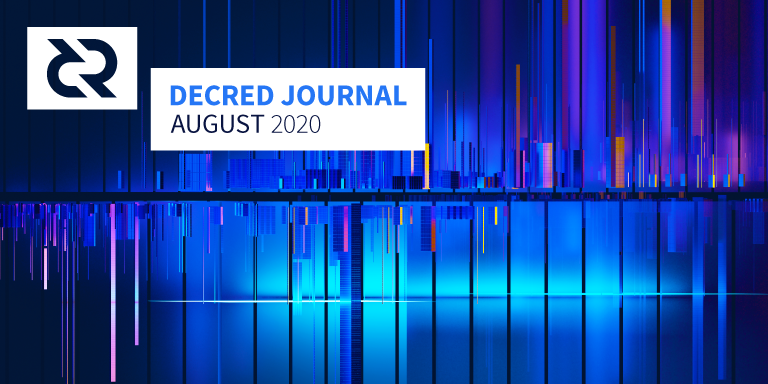 This release closes a potential denial of service vector. People running their own nodes as well as Proof-of-Work miners are advised to upgrade.

New binaries for dcrd and Decrediton are available here. Make sure to verify them - the instructions are more detailed and friendly now.

As of Sep 10, more than 20% of nodes have upgraded according to dcr.farm.

Speaking of building from source, changes in v1.5.2 were actually backported from an earlier fix on the master branch. It means that people building from source received it 1.5 months in advance of the binary release. If you would like to try it a new detailed and gentle walkthrough by @kozel is available to help.

by compiling your Decred software from source you can make use of code upgrades, bug fixes, and, amongst others, @davecgh’s epic performance optimisations the moment they come out, without having to wait for an official release that they will be featured in. (…) this is as cutting-edge as it gets.

Notably, the handling of notfound messages that triggered the v1.5.2 release was quickly backported to btcd and was part of its August release.

There have been many questions about staking with hardware wallets. @jz summarized the recent developments as of Sep 4:

The politeiad tlog backend and the politeiad plugins work is complete. The current focus is on refactoring politeiawww. The CockroachDB cache dependency has been removed, which was heavily relied upon by politeiawww previously, so refactoring the politeiawww routes involves what is essentially a full rewrite. We never hammered out a proper plugin architecture for the git backend, leading us to rely on the cache far too much. Now that we do have proper plugin architecture with tlog we’re having to pull apart large parts of the politeiawww logic and move it into the plugin layer. Over reliance on the cache also meant not building out the politeiad API since it was faster and easier to run the same queries against the cache. All of this is now having to be addressed.

Once the politieiawww refactor is complete we can run performance tests. If performance tests go off without any issues we’ll be able to put the tlog work up on testnet and start prepping for a release.

Final changes for the minimum viable vspd have been merged and the next step is to complete dcrwallet and Decrediton integrations.

A total of 51 PRs from 6 contributors were merged, adding 19K and deleting 4K lines of code.

Thanks to everyone who joined the alpha testing.

Community stats as of Sep 1:

* reminder: Matrix had a big “purge” in July.

Some observations from other accounts tracked by the social-media-data repository:

@pavel shared a screenshot and an update on the development of the Decred OnChain website:

Chart subpages are almost done. From UX/UI perspective, we are working on homepage. I would say we are ±75% done. (chat)

@bee is testing GitHub-based “proposal drafting infrastructure” that allows multiple people to edit the draft, get feedback and formatting help, track revisions, and post comments. Keeping drafts in a well-known place makes them discoverable and allows to save any progress for others to pick up even if the original author stops developing the proposal. Currently @lewildbeast’s awards and @elian’s BTCPay integration pre-proposals are hosted. To use this, submit a pull request to proposals repo or ping @bee in Matrix #proposals room.

Check Politeia Digest issue 34 and issue 35 for a more detailed review of the governance activity.

Our Network update by @Checkmate shares observations about an average of 100K DCR mixed daily making a significant part of the on-chain volume, hashrate boost following some market recovery above the “thermocap”, and changes in three Decred-specific metrics.

New research piece by @Checkmate gives a comprehensive overview of Decred mining market mechanics. For those preferring video/audio format, a summary overview of the paper and charts is available on YouTube. A full read is highly recommended.

Understanding the incentives, mechanics, and performance metrics of the Decred chain’s largest natural seller sheds light on both market pricing, and the strength of network security. This research should provide a sound basis for interpreting the context and performance of the Decred mining market.

Transak tweeted that DCR can be bought in 32 countries via its service.

BitcoinToYou now allows to buy and sell DCR for the Brazilian fiat currency BRL. @michae2xl presented Decred in a livestream on their channel.

Decentralized Treasury work is making some well-deserved noise on Twitter. Thanks to all developers for posting dev updates and everyone amplifying them.

Decred Latam team published second and third activities reports for their marketing proposal. All three reports are polished and archived in the proposals knowledge base.

@michae2xl reported on his August activities for the Brazil marketing proposal (archived).

In other news, @eSizeDave is facilitating a webinar to help academics from the Australian RMIT university to learn about Decred as part of their research.

Even though the memes proposal was abandoned, people started generating memes independently:

After hitting a new high of ~$12,100 on Aug 2, BTC/USD crashed to $10,550 within minutes and triggered a spectacular liquidation of more than $1 billion worth of futures. ZeroHedge wrote that price manipulation is likely since it’s not in the best interest of the seller to “take out the entire bidstack in one transaction”.

In a Twitter convo, @Checkmate shared his model where DCR’s bear market was hugely affected by compulsory selling by ASIC miners that invested in hardware at the peak bull market.

Bitcoin Cash is warming up for another community splitting hard fork. The developers of the BitcoinABC client announced that the next bi-annual hard fork on Nov 15 will add a requirement that a portion of each block reward goes to an address controlled by the developers. Roger Ver and others have tweeted this is not acceptable and they won’t be joining the fork.

Ethereum Classic has suffered another two double spend reorg attacks, with the attacker gaining $5.6 million from the first attack, which was executed with $204,000 worth of rented hashpower. The attacks reorged so many blocks that some implementations ignored them and the network partitioned.

Charles Hoskinson of IOHK and Cardano has proposed two ECIPs for ETC, one to add checkpointing which would stop the long reorgs, and a second to add a development fund which receives 20% of block rewards. The block reward proposal seems highly controversial in the community, with ETC labs rejecting the idea.

The YAM token and protocol was born and died in August, its cycle lasted for about 3 days, which is fast even for DeFi. The token was billed as a “governance token” for the YAM protocol, but as soon as the system started it became clear it was fundamentally broken. There was a short window where YAM farmers were mobilized to act and save the protocol but there was a bug in the solution as well so it’s dead now. YAM was covered in disclaimers about being experimental, unaudited, and was produced in a 10 day period by smashing other smart contracts together - one hour after launch, $76 million was invested, rising to $300 million the next day before the fatal flaw was announced.

MakerDAO activated an executive “spell” contract which was supposed to raise the ceiling for WBTC but instead set it to zero. It seems no harm was done on this occasion other than delaying the availability of more WBTC.

Zcash Foundation is selecting a 5 member board to control the share of block reward funding which it is due to begin receiving. The board will be selected by votes of the Community Advisory Panel, which currently has 62 members, but each member can now invite one additional member.

Coinbase CEO confirmed that the company is developing a platform to join in the initial exchange offering (IEO) business, provisionally titled Coinbase Launch.

Cryptocurrency adoption is most widespread in Nigeria and Vietnam according to Statista Global Consumer Survey.

The fintech company Plaid (as used by Coinbase, Gemini, and others) has been hit with a $5M+ class action lawsuit.

1. Imagine there is a company that knows every dollar you deposit or withdraw, every dollar you charge or pay to your credit card, and every dollar you put away for retirement, within hours after you make the transaction. Imagine this includes every book or movie ticket or meal you purchase, every bill you pay to a doctor or hospital, and every payment you make (or miss) on your mortgage, student loan or credit card bill. Imagine this company maintains a file on you containing all of this information going back five years. Imagine that this company uses your username and password to log into the online account you maintain with your bank and updates that file multiple times a day to stay up to date on every financial move you make.

Imagine someone got a hold of their database and used it to identify cryptocurrency holders.

Class action lawsuit against Google and Facebook was filed in Australia. Tech giants are accused of anti-competitive behavior for banning crypto ads in 2018, which allegedly killed the ICO market, damaging the wider crypto industry while not efficiently blocking impersonation scams.

A bipartisan group of members of US Congress have written to the IRS to urge a clarification on how PoS rewards are treated for tax purposes - and asking that these be treated not as income but as a good produced by the validator, to be taxed when it is sold.

This is issue 29 of Decred Journal. Index of all issues, mirrors, and translations is available here.