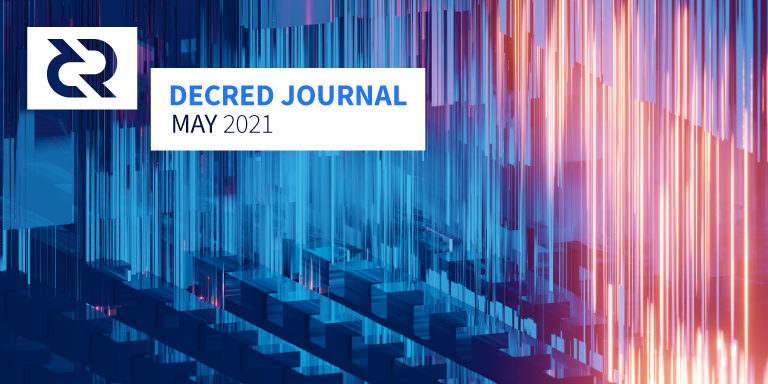 Latest release of our flagship GUI wallet Decrediton fixes issues with VSP staking, makes the wallet “cooler” with granular unlocking of accounts, and adds experimental integration of the new DCRDEX release. Command-line dcrwallet is updated as well with VSP staking fixes and improvements.

The new consensus rules activated on May 8. Starting with block 552,448, 10% of the block rewards are flowing to the new Treasury account and are no longer flowing to the legacy address.

The key difference is that the new Treasury account is controlled by Decred stakeholders. Spending from the legacy address only required a transaction signed by Decred Holdings Group LLC (“DHG”), a conventional corporate entity created to bootstrap Decred. Spending from the new account is only possible if stakeholders vote to approve a special “treasury spend” transaction (“tspend”).

A sophisticated voting process to support it was specified in Decred Change Proposal 6 and implemented in software release v1.6. In simple terms, the key steps are:

The new Treasury system was successfully tested on mainnet quickly after the activation. On May 10 the stakeholders were notified to configure their voting wallets. Then on May 12, a small test tspend transaction was broadcast to the network. The nearest voting window was May 13-24, but the vote “short-circuited” after accumulating 6,755 Yes and 1 No vote over 9 days. Out of 12,550 tickets that had a chance to vote in that period, 54% actively voted. The tspend was mined in block 556,416.

As of software release v1.6.3, tspend voting is only supported for “solo voters” who run voting wallets 24/7 (~77% of all stakeholders as of Jun 1). Work is underway to enable this for VSP voters.

Treasury spend voting will become an important monthly process to pay the people building Decred. Solo voters are advised to prepare for upcoming tspend votes by configuring their voting wallets with the following command:

This command expresses your trust to the current Treasury management and its key 03f6e704..., and sets how your wallet will vote for tspends signed by it. You can verify this key in the DCP-0006 or in the source code. The voting is semi-automated with this one-time configuration, but it is possible to vote on individual tspend transactions when more granular control is needed.

Congratulations to all stakeholders with this milestone and thanks to all contributors making it a reality!

Most of the work has been dedicated to updating UI code, testing, and fixing bugs after the massive upgrade to the new storage backend and the new API.

Politeia v1.0.1 has been released including all the above backend fixes and improvements.

Progress towards v1.1.0 can now be tracked on the Milestones page.

DCRDEX v0.2.0 has been released! It incorporates more than 3 months of work since the v0.1.5 release. The most notable changes are:

Check Important Notices and the full list of changes in the release notes. The DEX page guides through simplified installation steps. More advanced users can get the binaries here and install them manually. Don’t forget to verify the downloads to ensure they came unmodified.

A lot of exciting work towards the 0.3 milestone is in progress, most notably Ethereum and SPV.

Elias Naur (creator of the Gio library that powers godcr) has kindly reviewed the UI code and shared his recommendations. Issues were created to address them, and some are already completed (e.g. #409, #411, #416). 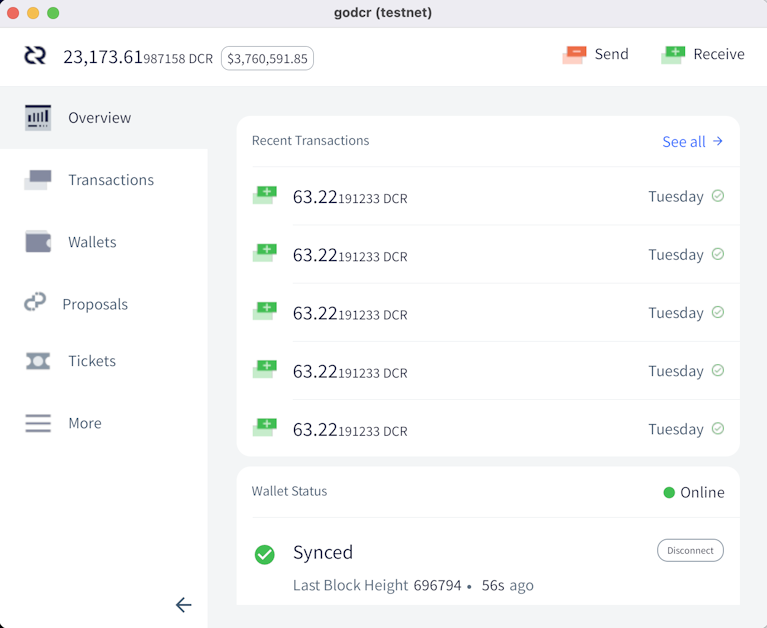 Community stats as of Jun 1:

May’s recap of interesting social media dynamics is out, now with tables for easier reading. Feedback is appreciated to understand how valuable these reports are.

All-time community growth charts have been tweaked, updated, and moved to a new location here.

May saw 1 proposal submitted and approved, the proposal for continued development of Politeia (detailed last month) had 98.4% approval and turnout of 44%.

Treasury charts have been added on checkonchain.com to assist with governance decisions around expenses.

On May 14 it was discovered that 4 legacy VSPs have not upgraded to the new consensus rules and got forked off the network on May 8, while holding ~350 tickets of their clients. All but one have eventually upgraded to continue serving their tickets, while stakepool.dcrstats.com changed to maintenance mode and stopped reporting the stats. The status of its 77 live tickets is unknown as of Jun 8.

Nodes: Throughout May there were around 215 reachable nodes according to dcrextdata.

Welcome the new vspd instance 123.dcr.rocks from @thefrankbraun. Service fee is 0.49% and voting wallets are located in 3 data centers on 2 continents. Since it was listed on May 1, the service has already voted ~430 tickets and manages ~650 live tickets as of Jun 8.

Legacy VSP dcrpool.dittrex.com was removed from the listing but is still online watching its last 1 live ticket. The service has voted 800+ tickets since Nov 2018. The replacement vspd instance from Dittrex is up, waiting its first voted ticket to get added to the list.

Since around May 17, Ledger Live users have been reporting issues with syncing and sending their DCR. Last update on Ledger’s incident page says the fix was being tested on May 20, but their Jun 3 tweet confirms the issue is still unresolved. As of Jun 8, the status page reports an outage for DCR and a 75% uptime over the past 90 days.

The following services have been removed from decred.org:

MarketplaceGOLD has compiled a list of merchants accepting DCR globally and announced it on r/decred.

Monde PR’s achievements for May: 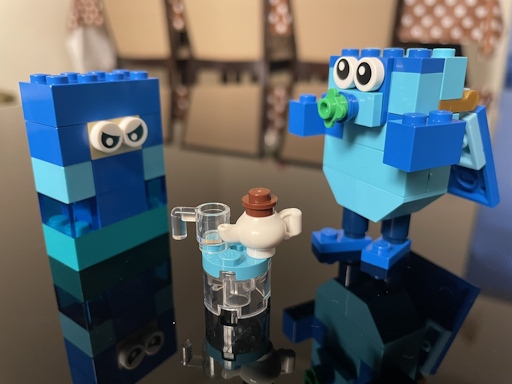 The Decred DAO has achieved a new milestone for the entire crypto space: A Digital Sovereign Wealth Fund.

The Decred network is the closest thing to a Digital Nation state.

A Layer 1 DAO with its own treasury, its own exchange, its own currency, and its own wallet. (@ammarooni) 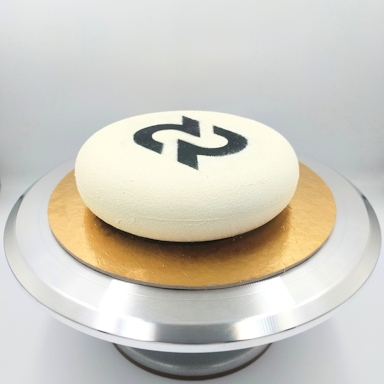 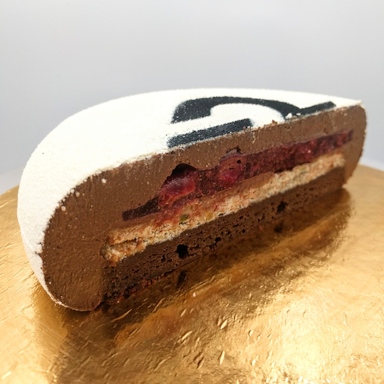 And its own cakes!

@PermabullNino posted a “charting spree” with lots of metrics unique to Decred and succint commentary. USD 40 and BTC 0.004 seem to be important levels for many miners and stakers.

@PermabullNino’s non-Decred series “Permabullish Banter” reports that the stablecoin printer is in full “brr” mode, and some insights on USDC.

Signalling for Taproot activation on Bitcoin has hit a level exceeding 90% (as of early Jun at ~97%) and is set to be locked in some time in June when the current signalling window ends.

Iran’s Central Bank has reportedly banned trading of cryptocurrency which is “mined abroad”, in an effort to stop capital flight. Iranian businesses are still permitted to obtain cryptocurrency from registered Iranian miners, for use in international payments.

Bitcoin mining pool Marathon Mining has mined a block which it describes as “fully compliant with U.S. regulations”, having censored transactions from entities it believes are sanctioned by the US Department of Treasury or have been involved in dark web activity. Despite their efforts some darknet market transactions made it into this block which was intended as a milestone for Bitcoin censorship.

After Elon Musk criticized Bitcoin’s environmental characteristics and Tesla stopped accepting it as payment, he joined with Michael Saylor and others to promote a new “Bitcoin Mining Council to promote energy usage transparency and accelerate sustainability initiatives worldwide”.

Ark’s Cathie Wood also remarked at Consensus that ESG (Environmental Social and Governance) concerns with Bitcoin meant “A lot of institutional buying went on pause”, crediting Elon Musk with a role in this movement.

The PoolTogether DAO, associated with the Pool Together lottery and controlling over 50% of all POOL tokens, has voted to diversify the holdings by selling 5.38% of all POOL tokens, currently controlled by the DAO, to a selection of VCs for the agreed sum of 7 million USDC. The POOL tokens bought by the VCs will have a lock-up period of 1 year, vesting over a 1 year period following that.

This is part of an apparent recent trend for DAOs to diversify their holdings.

May’s big Ethereum flash loan fail victim was xToken, where an attacker exploited bugs in two different contracts within the same transaction, netting a profit of $24.5 million after paying a $21,900 transaction fee to obtain the flash loan.

Binance Smart Chain is now providing competition for Ethereum in the DeFi dumpster fire stakes, after BUNNY tokens were hit for a notional $200 million in misprinted tokens following an economic exploit with, you guessed it, flash loans.

Coinbase is expanding its remit to also become a media company, going direct to their audience with “fact check” type content that is approved by its marketing department.

That’s all for May. Share your stories for the next issue in our declassified #journal chat.

This is issue 38 of Decred Journal. Index of all issues, mirrors, and translations is available here.